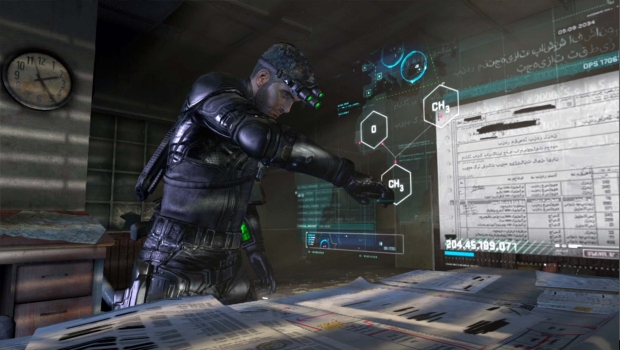 August 20th is just around the corner, and this morning we’ve got a video for Tom Clancy’s Blacklist.  This trailer goes over some of the core elements that will be returning, as well as some new features for the highly-anticipated title.   From what I’ve seen, this title looks to blur the lines between single player, multiplayer, and cooperative play.  From what I’ve played, it seems like it’ll be the best Splinter Cell title to date!  Here’s a nibble from my hands-on time with the game at E3.  It’s easy to see why it won our Best Xbox 360 game of the show.

Avoiding a pair of guards, one with a sniper rifle equipped with a laser, we dash from cover to cover, avoiding the temptation to simply shoot them both. Crossing the rooftops with a fluidity never-before-seen in a Splinter Cell title, we eventually make our way into the decrepit interior of the building.  We spot a few guards and use the improved “Mark and Execute” system to take them out.  In Conviction you had to use hand-to-hand to earn points to use this system, but in Blacklist it is now a four-stage system that fills as you do skillful things like avoiding detection, killing quietly, and generally playing the game in a natural way.  This means that you’ll earn it faster, giving you an opportunity to use it more often instead of sandbagging it as most people did in the prior game.   The fact that you can now do it while moving simply has to be seen to be fully understood.

There is no doubt that I’m excited for this game.   Look for Tom Clancy’s Splinter Cell: Blacklist on August 20th on Xbox 360, PlayStation 3, Wii U, and PC.