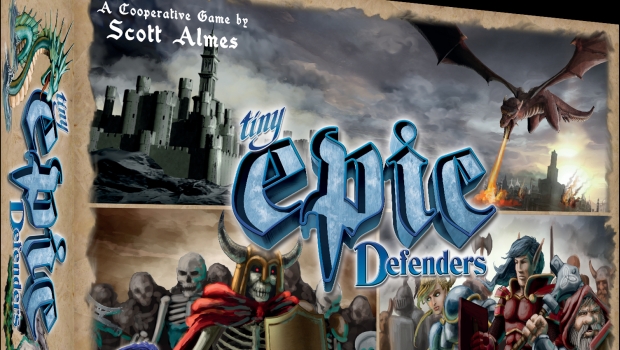 When most people talk about microgames, they think of a small number of cards and a couple of cubes.  While that is true in some cases, Gamelyn Games has created several microgames that consist of tiles and some nice looking figures.  Today they are expanding their “Tiny Epic” like by launching Tiny Epic Defenders on Kickstarter.

You have fought hard and established your Kingdom, but peace never lasts.

Gather your friends and defend the onslaught in this exciting and unpredictable cooperative micro-game!

In Tiny Epic Defenders, players must select their class and work together to defend the foreboding horde and slay the Epic Foe.

Will you take on the role of the Barbarian, the Sorcerer, the Cleric or the Warrior? Each class has a unique player power that you will need to use.

In this fast-paced game, players will scramble between various regions outside their Capital City fighting off enemy hordes! Each region will offers unique properties that players must calculate into their strategy

If your group is fortunate enough to defeat the wave of monsters, you may live long enough to face the Epic Foe! Which Epic foe will it be? Will you be prepared!?

Does your group have what it takes to survive? Will you have the synergy to be crowned the Tiny Epic Defenders!?

I really like the idea of a cooperative microgame, and they have already reached almost three times their $15,000 goal after launching earlier today.  Considering it is $16 for just the game and $24 to include the expansion, that’s an impressive figure.  Be sure to check out his Kickstarter, as well as the recently launched iOS version of Dungeon Heroes.