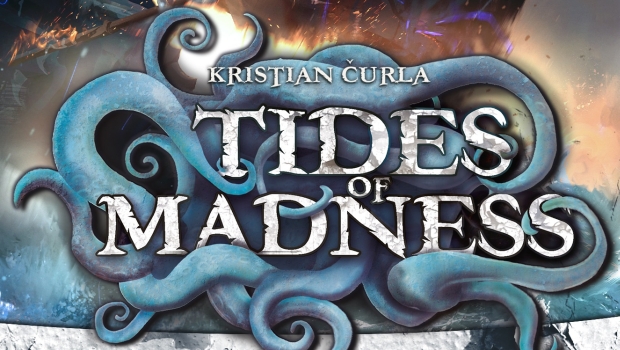 There aren’t many drafting games, but Tides of Time came out last year to high praise.  What made Tides of Time unique was the fact that is was specifically made for two players.  It was successful, and now a spin-off has been announced, Tides of Madness.

Today, Portal Games announced Tides of Madness, a 2-player drafting card game based on the award winning Tides of Time. Tides of Madness continues to use the familiar drafting and set collection mechanics of its predecessor and builds on those strengths with the introduction of Madness.

In Tides of Madness, it is not enough to try and draft the highest scoring set possible.You must also be aware of your Madness level during each round. Powerful scoring cards also come at a cost and if you draft too much Madness, you go insane and lose the game immediately!

“Tides of Time was a huge, worldwide hit of 2015,” says Portal Games CEO Ignacy Trzewiczek. “Having a chance to work on this title again and play with tweaking rules to come up with new mechanisms was a pure pleasure. I cannot wait to surprise our fans again with this epic and yet small game!”

Tides of Madness is for 2 players, ages 12 or older, and takes approximately 20 minutes to play. It is a stand-alone game and does not require a working knowledge of Tides of Time to play. It includes 18 large-format cards (80mm x 120mm), 20 Madness tokens, score pad, pencil, and a rules sheet. Tides of Madness will be released in August at Gen Con 2016 and will be available worldwide at the same time. MSRP will be $12.00 USD. For more information, you can visit the Tides of Madness page on our website at http://portalgames.pl/new_en/all-game-list/tides-of-madness/

I really like the thought of using Madness to balance out the highest scoring cards.  You can hardly beat the price for this game, and I have a feeling it will sell out quickly at GenCon.  Be on the lookout for it around then.