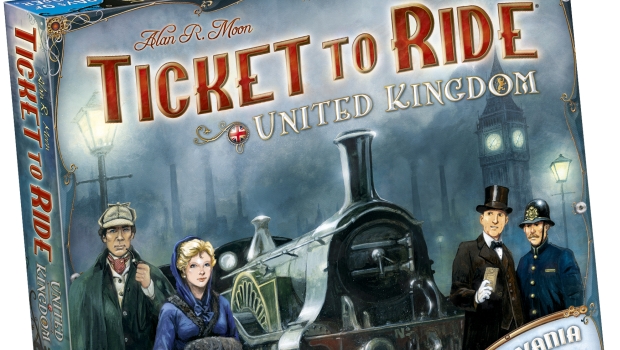 Ticket to Ride is not only my go to gateway game, but it is probably one of my favorite games.  The strategies that have come up in later maps have added a lot of replayability to the game.  I admit, I didn’t think that we’d see more maps for Ticket to Ride after Asmodee bought Days of Wonder, but I was wrong.  They have announced new maps based on the UK and Pennsylvania.

Today, Days of Wonder announced the upcoming release of the 5th volume in the Ticket to Ride Map Collection – United Kingdom. With this new map designed for 2 to 4 players, players will need to develop their technologies to be able to extend their network over the United Kingdom of Great Britain and Ireland during the 19th century. The double-sided map also features the board of Pennsylvania, a state full of railroad history where players will invest in railroad companies to achieve victory.

The United Kingdom map comes with a complete new Train cards deck including additionnal Locomotives, and Technology cards such as the Mechanical Stoker or the Thermocompressor that will allow players to develop their Technology level and build faster trains and claim long routes. The Pennsylvania map comes with 60 “Stock Shares” cards representing the great railroad companies of Pennsylvania. On this map, claiming a route also allows a player to invest in a company – having a majority of shares in a given company allows to score extra bonus points at game end.

“The new Technology system in Ticket to Ride United Kingdom is really challenging”, says Adrien Martinot, General Manager at Days of Wonder. “You need Locomotives to buy Technologies, but you also need them to claim vital routes on the map. Finding the proper balance between your Technologies and the expansion of your railroad network is the key to victory! On the Pennsylvania map, the challenge is different, but still, you’ll need to make sure to make the best investments in order to win”.

Ticket to Ride United Kingdom makes its debut at the Essen Fair in Germany in October and will be available in game stores in Europe shortly after. It will be available in the rest of the world in November for a retail price of $39.99/€35. For more information visit the website at www.daysofwonder.com/tickettoride/maps/united-kingdom

The technologies really make the UK map sound interesting.  I am curious to see how the Pennsylvania map works.  Look for Ticket to Ride United Kingdom here in November.