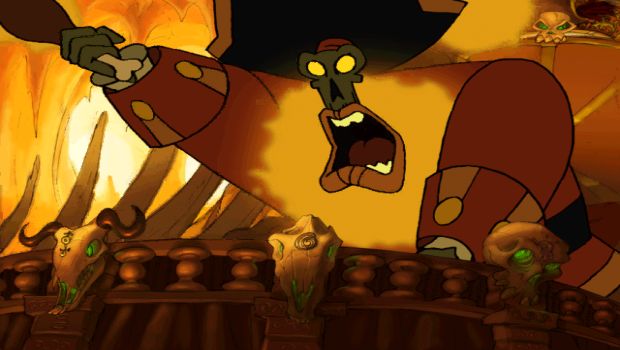 Last week I was saddened by the news that Disney had decided to shut down LucasArts, a company that has meant a great deal to me personally, as well as to millions of fans who have adored their countless contributions to the gaming world over the years. I felt a great void in my heart –  a Grim Fandango, Monkey Island, adventure gaming juggernaut-shaped void – and while it might be enjoyable to play the blame game here and talk about the Death Star-like entity that Disney has become, I’d like to use this opportunity instead to reflect a little on what LucasArts accomplished while they were around.

[singlepic id=11530 w=320 h=240 float=left]As a child of eleven or twelve, I remember receiving The Curse of Monkey Island for my birthday, thereby introducing me to the SCUMM gaming engine, some of the best game writing of the 1990s, and so much more. While I am trying not to gush too much, this was what started it all for me. An intense passion for gaming was born that LucasArts fueled like dry wood for a fire, and along with Roberta Williams’ legendary King’s Quest series, these adventures amazed me with their creativity, imagination, and the intellectual trials and tribulations that lay around every corner. These three things formed the essence of LucasArts adventure games, and I, like so many others, was enchanted.

Take another game I mentioned earlier for example, 1998’s Grim Fandango, a Mexican-themed waltz through the Land of the Dead that delivered on everything I’d come to expect in these games. I remember asking my grandfather with mild trepidation if I could use his computer to play it – the old Gateway he had bought for accounting was the only machine I had access to that could run it at the time – and he always said yes. Every single time I fired it up, I felt like I was actually traveling to a parallel dimension filled with majesty and wonder. Yes, there were moments of intense frustration, but that was an inherent part of the experience. If I had wanted a game where the answers lay right in front of me, I would have stuck to Putt-Putt, but working through those puzzles constituted some of the first moments of feeling like I could actually think like an adult, using advanced logic to solve complicated problems. At home, when I played Monkey Island¸ I would frequently beg my mother to let me play beyond the thirty minute time limit that she had instated, often raking leaves in the yard or doing other chores to “earn” more time in lieu of dollars. There were PC  games that belonged to different genres, which I loved – things like Worms 2, Caesar III, and a bit later my first FPS, Medal of Honor: Allied Assault  – but I never did the yardwork-for-computer-time gig when it came to such titles. It was always Sierra or LucasArts that brought out that kind of love, providing me with some of my best memories during that awkward epoch of pre-pubescence.

[singlepic id=11532 w=320 h=240 float=right]And what about the dark magic that was cast upon me when my best friend introduced me to LOOM? The excitement I felt at learning a new spell, or “draft”, then playing it as a musical progression, was something I scarcely felt with any other game before or since. Bobbin Threadbare, the hero, and his escapades through space and time contributed heavily to the early development of the genre. This was a game by Lucasfilm that ran on DOS and came out in 1990, though the gameplay was somewhat scary, contrasting with the tongue-in-cheek humor of later releases – I’ll always remember when a dragon slaughtered a group of shepherds, and my subsequent elation at being able to bring them back to life, or the fear I felt when confronting Chaos, the dark overlord and villain of the game.

Certainly Star Wars games played a big role in the company’s storied past, though they never had quite the same resonance for me. But people like Tim Schafer, who designed and wrote Grim Fandango, Michael Land, who composed the brilliant Caribbean soundtrack for the entire Monkey Island series, or Dominic Armato, whose voice-acting brought Guybrush Threepwood (the blonde, slightly ditzy hero of M.I.) to life in ways that I never thought possible – they were the ones who cemented PC gaming in my heart as a lifelong love, and I owe them an enormous debt of gratitude for the pleasure they provided. Yes, the company has gone the way of the Dodo, and I do think Disney is becoming somewhat of an evil empire in the hands of CEO Bob Iger, who acts like he wants to soak up as many people’s livelihoods as possible into his gaping, Cthulhu-like maw – but the memories of LucasArts will stay with me forever, and even he will never be able to take that away. As Guybrush once remarked to the evil buccaneer LeChuck (with typical post-modern self-awareness), “If you kill me… there won’t be any more Monkey Island sequels. Then, everyone will forget you!” to which he responded “Forget me? I’m the dead zombie pirate LeChuck! No one will forget me!”

Couldn’t have said it better myself. Goodnight, sweet Guybrush, and flights of angels sing thee to thy rest.