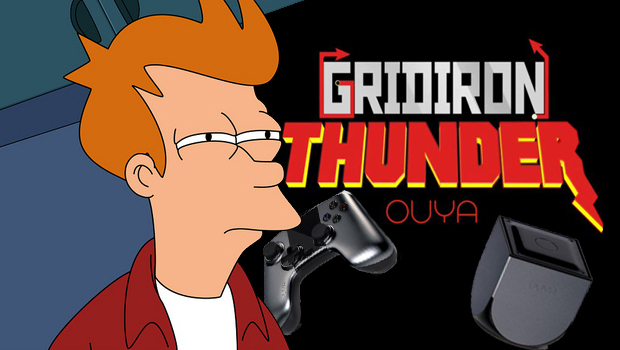 With only 139 backers at the time of this writing, the upcoming OUYA game Gridiron Thunder has raised over $78,000 on Kickstarter in a span of twenty days. This has sparked a wildfire of online controversy that’s led many to believe that the project is a scam and the developers at MogoTXT are actually funding the Kickstarter themselves.

“But where’s the scam, who cares if they fund their own game?” I’m glad you asked, because the answer lies within OUYA’s current project called the Free the games fund, a promotion aimed at supporting independent developers. For a limited time, OUYA will match up to $250,000 of the amount raised by any Kickstarter game as long as it remains an exclusive OUYA title for its first six months. In other words, this can be a pretty easy way to double your money if you know the basics of game design.

These accusations have not gone unnoticed by Andrew Won, CEO of MogoTXT. In an interview with penny-arcade.com, Won said, “We’re not scamming anyone, we’re not ripping anyone off.” Won says “I’m just bewildered by the criticisms, I’m bewildered by the cynicism and the lack of trust. Why people believe in a sense of an online community if there’s not going to be a sense of trust.”

The most suspicious aspect of Gridiron Thunder’s Kickstarter is the large amount of funding that’s been raised by so few backers. When you take it to the calculator, backers donated an average of $564 each, a large amount for typical campaigns. Also, most of the money donated comes from backers who chose not to receive their incentive reward. Some of the rewards include getting a stadium in the game named after you for $500.00, or a Superbowl party invite for pledging $10,000. Surprisingly, only around $5,300 of the donated money is registered for any reward, leaving roughly $73,000 pledged from backers asking for nothing in return.

If you really want to break it down, check out some interesting funding stats on Kicktraq.com. For instance, on August 19th, four backers donated a grand total  $25,020. That’s an average of $6,255 per person in one day.

To help put this into perspective, let’s take a look at the Oculus Rift – you know, that VR headset everyone and their grandmother is talking about. During that popularly publicized Kickstarter campaign, there was only a grand total of seven backers who donated $5,000 or more.

Okay, it’s fishy, but the developers at MogoTXT still say they’re “really trying to build an awesome title.” So how good is it? See for yourself. Below is a link of the latest gameplay video from MogoTXT. Keep in mind that this gameplay footage was posted yesterday, and MogoTXT has set the release date in just over two weeks from now – September 15th.

So what do you think? Are these developers gaming the system? Please share your comments below.