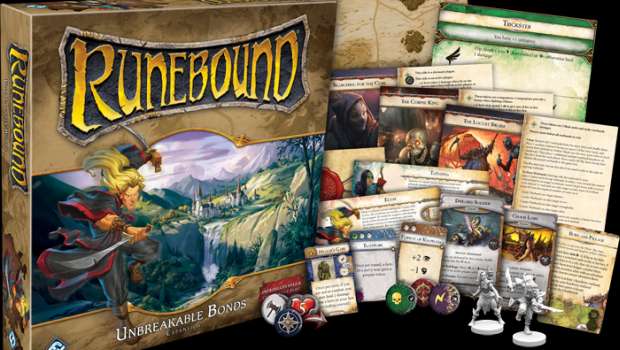 While Runebound is technically a two to four player game, I thought to myself that it could probably be played solo with a few tweaks.  Now I’m not saying that Fantasy Flight was reading my thoughts, but great minds think alike.  They’ll be releasing the Unbreakable Bonds expansion for Runebound Third Edition later this year.

You’ve spent your life tramping across the fields of Terrinoth, facing danger time and again, testing your skills in battle against terrifying monsters, and living a life of unchecked adventure. You never know what you may discover beyond the horizon—a towering range of mountains, the lair of an evil beast, or the sun reflecting from the walls of one of the Free Cities. Yet throughout your travels, there’s always been a feeling of competition with other adventurers, driving you to fight harder and move faster than another so-called “hero.” Just maybe you’d prefer to work and fight together, once in a while?

Unbreakable Bonds is a new expansion for Runebound, and gives you the option to dramatically reshape the nature of the game. Rather than competing against up to three opponents, Unbreakable Bonds invites you to journey through the fantasy realm of Terrinoth as part of a group, or even to strike out on your own in a solo game! With a robust combat system to control the monsters, two new heroes, five cooperative / solo scenarios, and a wealth of new asset and skill cards, Unbreakable Bonds pushes the borders of Terrinoth further than ever and leads you into new adventures with every game.

More than anything else in Unbreakable Bonds, the new scenarios change the nature of the game. Before, you could maintain a petty rivalry with the other heroes and still increase your skills, gain new assets, and defeat the evil that threatens Terrinoth—but now, you’re facing a deadly threat that forces you and your fellow heroes to work together if you’re going to survive. Within this expansion, you’ll find two brand-new Runebound scenarios for you to play cooperatively or solo: The Locust Swarm and The Red Death. And if that weren’t enough, you’ll also find new scenario cards for three existing scenarios, inviting you to play the Core Set scenarios or Caught in a Web as a cooperative or solo scenario!

Like previous Runebound scenarios, each of the new cooperative / solo scenarios outlines a new danger facing the realm that the heroes will need to face. Unlike earlier scenarios, however, the threats you face with Unbreakable Bonds are great enough that the heroes of Terrinoth must choose to unite to protect the Free Cities. You may be pitted against vicious outbreaks of disease or ravaging Uthuk Y’llan warbands, but either way, you’ll need to work together with your companions to best the obstacles placed in your way.

Fortunately, in a cooperative game, you and your friends aren’t doomed to fight alone. In fact, you now have the option to form a party with one or more other heroes by moving into the same space. While you belong to a hero party, the entire party moves as a single group. When one hero moves on his turn, the entire party moves with him, making it a highly efficient way to cover more ground. What’s more, belonging to a hero party also gives you the chance to learn new party skills! These powerful skills show you the real benefits of staying in a group, whether you’re making attribute tests with Cover Weakness or supporting each other in battle with a Coordinated Attack.  Of course, sometimes the party must split up to accomplish separate goals, but when you rejoin, you’ll regain access to any party skills that your group has purchased over the course of the game.

Including cooperative and solo play will make this easier for me to introduce the game to other people who might not normally be willing to try it out.  You can find out more about it here, and with a third quarter 2017 it will probably release at Gen Con.