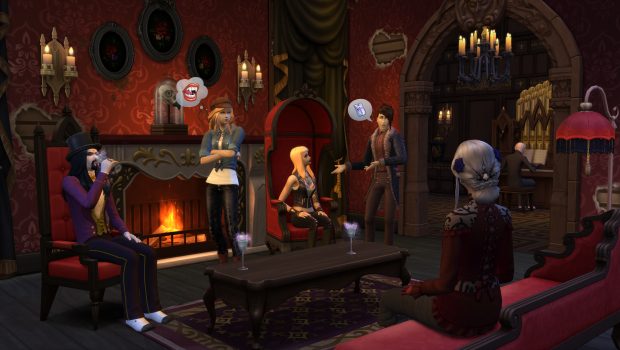 Electronic Arts has announced the Vampires Game Pack, the next expansion for The Sims 4.

With the Vampires Game Pack, Sims afflicted with vampirism come with special motives and needs revolving around gaining vampire powers and consuming “Plasma,” (which seems to replace blood in this family-friendly expansion). In order to accumulate Plasma, vampire Sims can purchase Plasma Packs, grow Plasma Fruit, or even sneak up on Sims to drain it from them as they sleep.

Vampire Sims will also come with exclusive “powers,” including the ability to spread your vampiric germ to other Sims and create other Vampires. Vampire Sims will also feature unique behaviors, like an eerie walking animation and a tendency to burst into flames when exposed to sunlight. Infants may also be born as Vampires, though powers will not begin to appear until they reach teenage years.

With the expansion also comes a new playable area called Forgotten Hollow. This one-block area features five lots centered around a plaza area dedicated to the hollow’s founder, Vlad. The new playable area features atmospheric fog and creepy old foliage. Vampire Sims will appear in both Forgotten Hollow and in other Sims Worlds, though they will be most prominently featured in the newly featured World.

As is the case in most Sims Game Packs, a robust assortment of Create a Sim options will come with the Vampire Game Pack, including new pale skin tones, sunken eye sockets, and dramatic brow options.