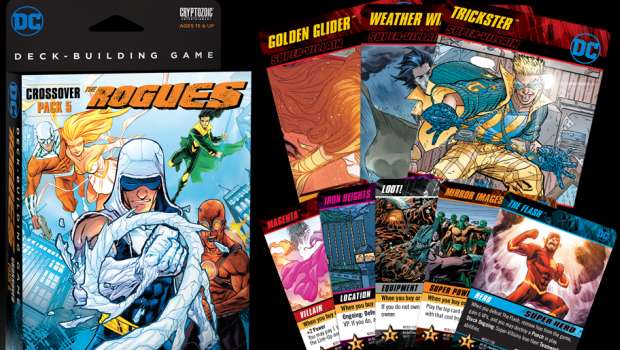 The DC Deck-Building Game has had a lot of longevity with several versions released for it.  The next crossover pack looks very interesting, as it introduces several enemies of The Flash.

Cryptozoic Entertainment, leading creator of board games, trading cards, and collectibles, and Warner Bros. Consumer Products, on behalf of DC Entertainment, today announced the March 22 release of DC Deck-Building Game Crossover Pack 5: Rogues. The expansion for the popular DC Deck-Building Game series allows players to play as six of The Flash’s worst enemies, who must work together using the new “Teamwork” mechanic.

Each player chooses a Rogues Super-Villain to play as, then they shuffle in the pack’s 23 new main deck cards into any DC Deck-Building Game base set, instantly adding all-new Equipment, Villain, Hero, Super Power, and Location cards. The pack even comes with eight Super Heroes for the Rogues to battle.

“Teamwork” lets a player play the top card of a foe’s deck, underscoring an alliance the Rogues have formed as they try to eliminate The Flash and his friends. Since Super-Villains are always looking out for their own interests, any player whose deck is used by another player automatically gains one Victory Point (VP). Also, every main deck card in the set immediately grants a player VP tokens when acquired.

DC Deck-Building Game Crossover Pack 5: Rogues will be available at retailers nationwide this week for a suggested retail price of $12.99. It requires a copy of the original DC Deck-Building Game or one of its standalone expansions—Heroes Unite, Forever Evil, or Teen Titans—to play.

I bet that this one would be interesting to mix in with the Forever Evil set.  Be sure to look for this when it becomes available next week.