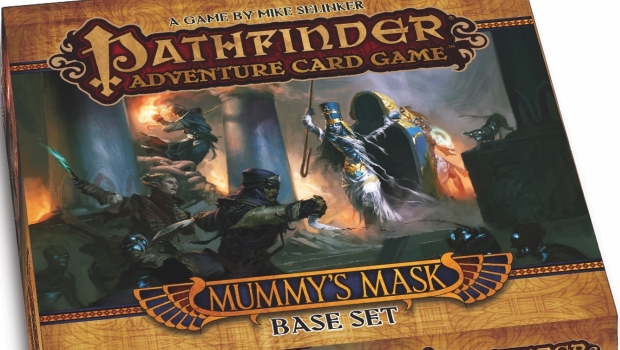 Not only has the Pathfinder RPG system had huge growth since it’s been released, the number of sourcebooks made for the system has shown how flexible it is to different settings.  You want to do an apocalyptic wasteland?  Go right ahead.  How about a pirate of the high seas?  Sure!  Fighting the minions of hell?  There’s a campaign for that.  Some of these scenarios have been covered in previous games in the Pathfinder Adventure Card Game.  Now Paizo has announced that the next game in the series will cover ancient Egypt.

Heroes will brave terrible guardians, foul cults, and the burning sands of the desert to stop the rebirth of an ancient tyrant in this cooperative strategy game that pits one to four players against the monsters, curses, and traps of theMummy’s Mask Adventure Path from the Pathfinder Roleplaying Game. Players will choose their character’s class, build a deck of equipment, magic, and allies, and explore dangerous locations as they journey through an exciting fantasy tale.

Pathfinder Adventure Card Game: Mummy’s Mask Base Set will release worldwide on October 2016, but is available now for pre-order on paizo.com(MSRP $59.99).

I’m certain that more adventure packs and characters will be available after the release.  Three different sets are available already, so if you can’t wait for this set you might want to look for those while you wait.