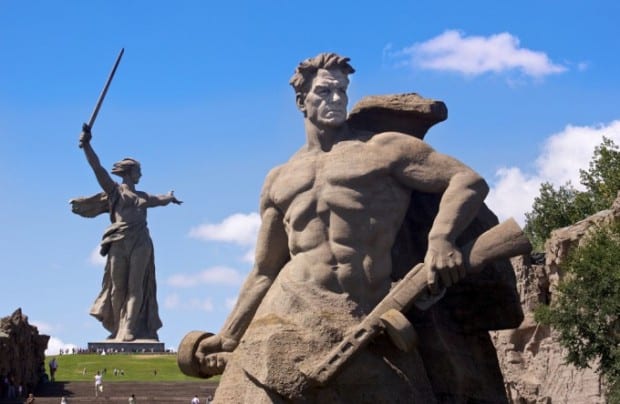 The Motherland Calls is the name of the statue in the background, and I couldn’t think of a better representation than these two amazing Russian statues in Volgograd Russia to represent the awesomeness that is Company of Heroes 2.   Today we have a fantastic new trailer for the title that shows off the multiplayer in action. I took an extensive closed-door look at it at E3 (you can read that here) but having had some hands-on time with the product recently, let me tell you that my very-positive preview of the game is understated – hold your breath strategy fans…you just lost all your free time.   Here’s a nibble about the setting for the title:

It is 1941 and the beginning of what will become the most brutal conflict of World War II, as Germany launches a full-scale invasion of the frozen tundra of the Soviet Union which would result in over 14 million military casualties. Take command of the iconic Soviet Red Army in brutal frontline warfare to free Mother Russia from the invading Nazis. Your strategic skills and tactical expertise hold the power to tip the very balance of this conflict in the sequel to the critically acclaimed and multi award-winning Company of Heroes. Engage in visceral tactical combat that will define you as a military leader and challenge you to wield the might of the Soviet Empire as you smash your way to Berlin.

This video shows off the Axis powers, their commanders, and gives us a look at the amazing 1v1, 2v2, 3v3, and 4v4, as well as the incredible graphics. See for yourself, comrade!