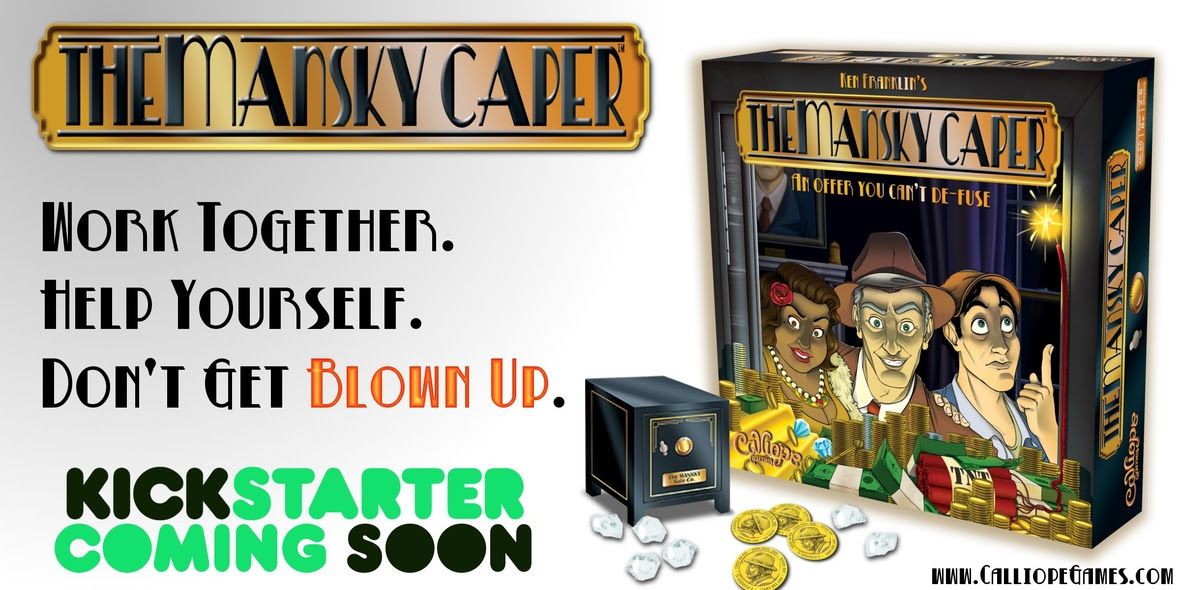 When you think about Prohibition there’s the speakeasy clubs, The Great Gatsby, gangsters, and the roaring ’20s.  It’s a theme rife with possibility, but few games actually have taken advantage of it.  Calliope Games has just announced that they will be bringing The Mansky Caper to Kickstarter for funding.

Calliope Games is thrilled to announce its first new release of 2018. The Mansky Caper, designed by Ken Franklin, will be launching soon on Kickstarter, with an anticipated release in Spring 2018. Featuring immersive art, pre-built three-dimensional components, and amazingly interactive game play, The Mansky Caper will blow you away! Each game of The Mansky Caper is an exciting heist for 2 – 6 players 8+ years old which plays in less than an hour.

Ken Franklin’s The Mansky Caper is more than just another game release. This project has become a labor of love for Calliope Games. Every aspect of the game has been designed to maximize the Prohibition-era theme and provide the greatest experience possible. The game comes with shiny plastic gems, drawstring bags, and really cool 3-D safes to open – all of which are prebuilt when you open the box!

When it came time to hire an artist for the project, the perfect candidate was Matt Franklin, son of the designer, who is not only someone who understood the vision and importance of the project but is an amazing artist with numerous art credits in the game industry in his own right. The history of this game is incredible (we’ll share that in a future Calliope Games Newsletter), but suffice it to say The Mansky Caper has been extensively play-tested and is now ready to shine on game tables around the world.

It’s 1925. You and your Family of Associates have been trying to get respect for years. But the richest mobster in the country, Al Mansky, has been cramping your style. Al’s a bit eccentric; he doesn’t trust the cops or banks, so all his loot is in his mansion, guarded by a diabolical security system of explosive traps. The good news is that he’s out of town.

It would be a shame if something happened to all that loot, but a Family (working together) that bested Al would make quite a name for itself. Of course, the most fame – and (dare we say) leadership of the Family – goes to the person who walks away from the job with the most loot.
Your colleagues may not agree with you – but you all owe each other favors. Calling in the right favor at the right time is what leadership is all about in this business. The key is to work together to help yourself – and don’t get blown up!

In The Mansky Caper, players team up to ransack rooms of Al Mansky’s mansion, opening safes to find the valuables inside. Split loot with others in the room, and watch out for twists of fortune and dangerous traps that can ruin your plans with a bang! The winner is the player who has accumulated the most loot in their private stash at the getaway car by the time Al’s mansion is completely ransacked.

The Mansky Caper sounds like a lot of negotiations, luck, and backstabbing.  Prepare to open your own safe for an offer you can’t refuse at Kickstarter soon.