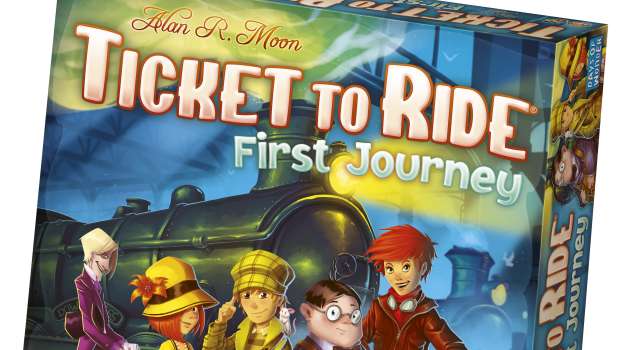 Ticket to Ride is one of my favorite games, but I haven’t been able to introduce it to my son since he isn’t old enough to understand the rules.  He really likes trains right now, building tracks and pushing cars along them.  It looks like Days of Wonder has come up with a solution to my problem with the introduction of Ticket to Ride: First Journey.

Today, Days of Wonder announced Ticket to Ride First Journey, a family­friendly introduction to the Ticket to Ride series. This game features a new board of North America, with shorter routes and whimsical illustrations. With this simpler version of Ticket to Ride, younger players and beginners alike can take their first steps in the train game series.

Although rules are simplified and game objectives made easier, the game remains faithful to what has made Ticket to Ride a success: players race to complete their tickets by capturing routes on the board. The imaginative art on the board and on the ticket cards makes it easy to find cities for even the youngest players, who will be delighted to build their own networks with the big plastic train pieces included in the game.

“Of all the Ticket to Ride games, this one was the most fun to playtest,” says Alan R. Moon, the game designer. “In the very first game, I completed the first ticket. I slammed it down on the table and loudly announced ‘Ticket.’ And that was how that rule was born! It’s especially fun to draw a new ticket that you can immediately complete which lets you put that ticket down and announce “Ticket” again. I wasn’t sure I could make the game simple enough for children, but I’m thrilled with this version and I hope it will serve as a great introduction to the adult games.”

I’m a bit surprised that it will be a Target exclusive, but it should reach a wider audience if it’s available in that store.  The board looks colorful and the chunky pieces should be easier for kids to grip.  I’m looking forward to checking this out when it becomes available.