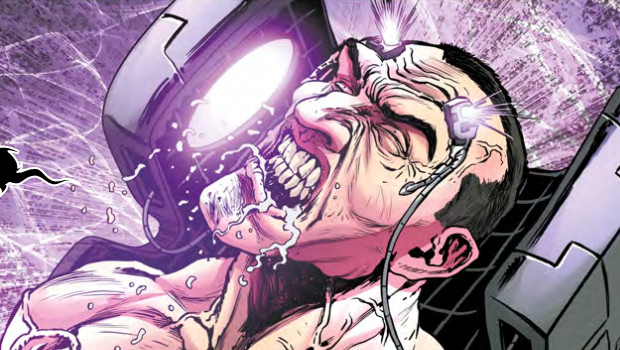 It’s 1986. After an 18-month hiatus, Doctor Who is back on TV for its 23rd season. The Sixth Doctor is put on trial by the Time Lords for interfering with events of the universe during the course of his travels through time and space. The pompous, self-centered and manipulative prosecuting attorney, known as the Valeyard, seems strangely familiar. Eventually, the Master reveals to the Doctor: “The Valeyard is an amalgamation of the darker sides of your nature, somewhere between your twelfth and final incarnation.”

The Valeyard: An amalgamation of the darker sides of the Doctor’s nature. Also a continuity nightmare.

Fast-forward to 2017. Despite being the first issue of a new story arc, “Sin-Eaters Part 1” is a terrible jumping-on point for new readers. The “Previously…” section on the inside of the front cover mainly focuses on Captain Jack Harkness, who is not seen in this issue, and it gives no details about the circumstances of the Doctor’s arrest. Near the beginning of the issue, there’s a machine that puts all of the Ninth Doctor’s darkness into a sort of blank slate body. This should be another Valeyard, shouldn’t it? But it isn’t. It’s The Incredible Hulk with the faces of previous Doctors coming out of his chest.

A Sin-Eater: The Doctor’s dark side. Also a continuity nightmare, but for a different reason.

Rose fans may be reasonably happy with this issue because she serves as the main protagonist in it. She impersonates an inspector as a way to enter the prison facility and reunite with the Doctor. Ninth Doctor fans, however, will be thoroughly disappointed, as the proper Ninth Doctor only appears in a handful of frames. In his place is a monster whose nature shows a shocking disregard for Classic Who—the darker side of the Doctor shown as something completely different from what such a thing was previously established to be.

One thing I can say in this story arc’s favor is that it’s an interesting idea for a prison. It asks some deep moral questions about what makes us human: would it be acceptable to forcibly remove every “negative” emotion from people? Or are there times when fear, anger, and hate can change things for the better? And what are we without those?

I think this story arc has potential if it focuses more on exploring those questions and less on the ridiculous monstrosity that logically should have been another Valeyard. I’m always happy to see more content focusing on the Ninth Doctor, who was only on the show for one season.