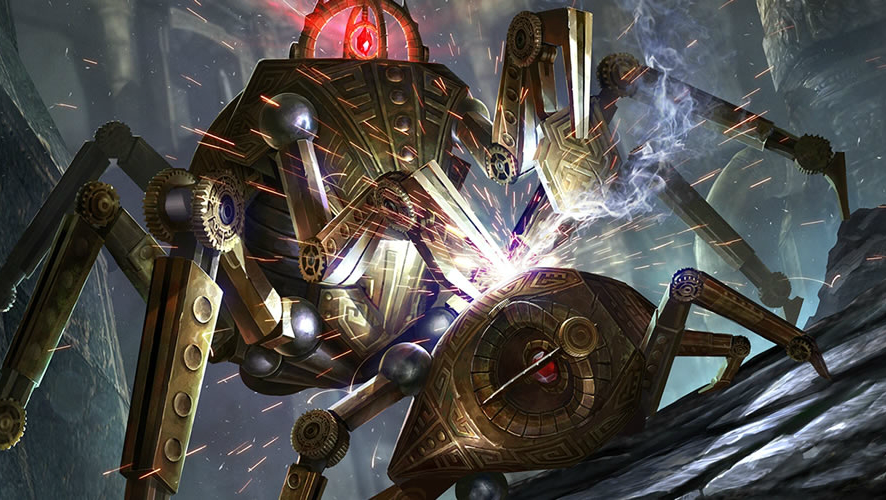 Bethesda has announced an upcoming expansion for their card game The Elder Scrolls: Legends, titled “Return to Clockwork City”. Return to Clockwork City is set for a November 30th release. The content will be split into three separate acts, and provided at a bundled price of $19.99. The expansion promises more than 55 new collectible cards rewarded across 35 exciting story missions, as well as five new “Fabricant” creatures.

The Clockwork City is the grand workshop of the late god Sotha Sil, who was obsessed with crafting his own forms of life, reconstructing and building on the work of the Dwemer artisans.

Perhaps his most intriguing and disturbing creations were the Fabricants, unique creatures born of both flesh and metal. In Legends, we’re bringing these to life with five Fabricant cards – one per attribute – that will reward players for playing with neutral cards like the Dwemer constructs. These five creatures offer some serious power, and create some exciting new deckbuilding possibilities.

Enter the Treasure Hunters and the first of our new mechanics – denoted with “Treasure Hunt.” While in play, these adventurous fellows will watch each card players draw to see if it’s the treasure they’re looking for. Once players draw everything the hunters want, a reward awaits. For example, the new card Relic Hunter rewards a buff to the first weapon players draw after playing him – it wasn’t just any weapon, but the priceless object he’d been seeking!

In the years since Sotha Sil’s demise, his creations have had to fend for themselves. The humanoid clockwork constructs known as the Factotums have done that by learning to collectively repair, enhance, and upgrade their own bodies. Which brings us to the other new mechanic in Clockwork City: Assemble.

When players play an Assemble creature, they will choose one of two bonuses. That bonus will be bestowed upon both that creature and every Factotum in the player’s hand and deck.

In addition to the new cards and missions to come, there will also be new game mechanics designed to mimic the treasure hunter’s dream that is The Clockwork City, as well as its creator’s mad pursuit in the assembly of life itself via the all new “Assemble” creature type. All in this appears to be a quite sizeable update for the game. The release also seems to line up relatively well with it’s bigger sister, The Elder Scrolls Online, recent expansion release for The Clockwork City as well.

visit Bethesda.net for the full breakdown of The Elder Scrolls: Legends: Return to Clockwork City, including 6 new card reveals, and be sure to check back with Gaming Trend for all news.