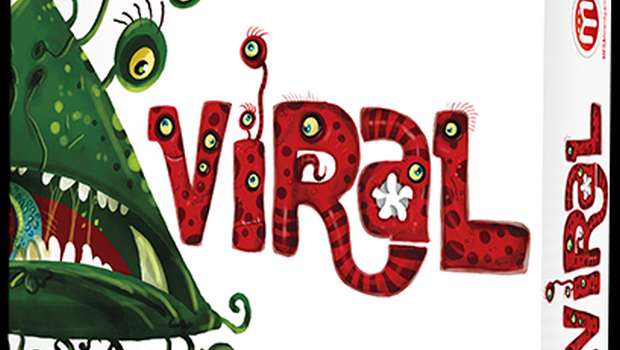 So far the Dice Tower Essentials line has been a huge hit with Onitama, Sheriff of Nottingham, and Royals.  Now Arcane Wonders has announced the next game under that label, Viral.

Arcane Wonders® is pleased to announce they have partnered with MESAboardgames® to release the English language version of VIRAL, designed by António Sousa Lara and Gil d’Orey. VIRAL is an intense area‐control board game where players compete to infect and control organs in a human body.

You are a deadly VIRUS! You have just infected a patient. Your objective is to mutate and take over the host’s organs. Choose your strategy carefully, though, because other player’s viruses are sure to get in your way! If too many viruses are present in an organ, a CRISIS occurs and the IMMUNE SYSTEM will surely wipe out your infection!

“When Tom brought us VIRAL to play, we fell in love with it immediately!” says Arcane Wonders President, Bryan Pope. “It has a fresh, original and clever theme; a territorial control game set inside the human body! The game play is simple and streamlined, yet it has lots of great tactical decisions and difficult choices. The game has a lot of flavor and personality, with great player interaction. My favorite part is the mutation cards; They allow you to mutate your viruses, changing how they behave, and develop your strategy.”

VIRAL is being released in the Dice Tower Essentials line of games; games that noted reviewer Tom Vasel (www.dicetower.com) believes are essential for any gamer’s collection.

Attendees of Gen Con will have the first public opportunity to play VIRAL at Arcane Wonder’s booth. Look for VIRAL to hit retail shelves in August 2017 with a MSRP to be determined. Gameplay is 60‐90 minutes for 2‐5 players ages 14+.

It sounds like an intriguing premise, and with an August release date, we’re likely to see it at Gen Con.  If you are looking for an easy to teach area control game, then VIRAL might be one to check out.