At this point any racing game has to fight to have my attention. Today Ubisoft and Ivory Tower (makers of the rather fantastic Driver: San Francisco) managed to do just that when they introduced their new open-world racing experience, The Crew. The Crew seems to have a large focus on multiplayer and its expansive environment. At one point in the Ubisoft demo, it was noted that although we were in the mountains of Nevada, we could have driven down to Las Vegas and drag raced on the strip. The announcement press release reads:

The Crew propels gamers on a reckless ride through a massive open world version of the United States of America, brimming with exciting challenges and diverse terrain – from city to suburb, county to county, state to state, coast to summit. The Crew redefines the level of freedom players experience in a driving game by offering a playground of unprecedented scope in which any driving fantasy can be realized: street, dirt, cross-country, circuit and more.

To bring that vision to life, The Crew leverages the capabilities of new hardware to connect players online like never before. The Crew’s persistent online world is populated by other real players, meaning any other car is a potential rival or ally, and naturally fostering both competition and cooperation among players. This living world provides a tailored experience to a new generation of gamers, as each player is given the choice to play alone, or to team up on-the-go with friends to accomplish collective challenges.

The Crew will release in early 2014 on the Xbox One and PS4. Sexy screenshots are below. 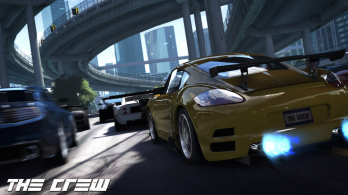 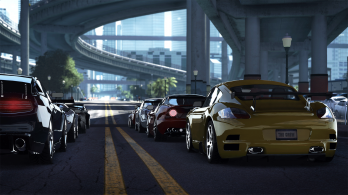