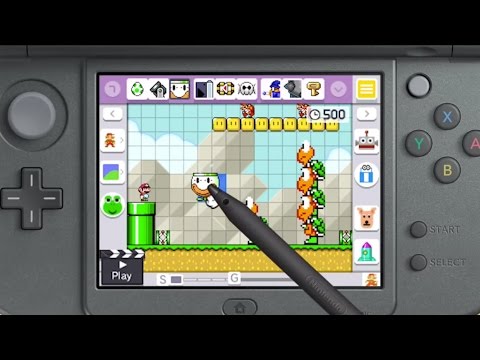 The popular Wii U level creator is coming to 3DS and will come with 100 built-in courses and the full toolset of items and blocks from the Wii U version – with the exception of the Mystery Mushroom and all Amiibo costumes. Players will be able to play levels made on the Wii U version, though not all levels will be compatible with the 3DS version.

Last year’s adorable Wii U platformer is coming to 3DS with a wealth of new content. The handheld version will come with every single stage from the original version as well as new stages for Yoshi’s companion, Poochie. Additionally, a new item called Poochie Puffs will come with the 3DS version, which Yoshi throws to find hidden secrets in each level.

The new Pikmin game for 3DS is a sidescrolling action adventure game featuring Olimar and his little companions. Mapped to the 3DS’ bottom screen, players will use the stylus to aim and throw Pikmin to defeat enemies and collect treasures. Footage of the game shows various Pikmin from previous games, such as the red fireproof Pikmin, the yellow electric Pikmin, and the blue water-breathing Pikmin. The game will be released some time in 2017.

Mario Sports Superstars is a compilation of five sports for characters from the Super Mario series to compete. Mario, Bowser, Peach, and many others will face off in soccer, baseball, tennis, golf, and horse racing. A single-player tournament mode will be available as well as local and online multiplayer. However, no mention of download play was made during the Nintendo Direct.

Mario Sports Superstars will be released in Spring 2017.

In celebration of the 30th anniversary of The Legend of Zelda for NES, Nintendo is releasing a new line of Zelda Amiibo figurines. 4 new Amiibo were revealed during the Direct: 8-bit Link, Ocarina of Time Link, and a new two-pack of Toon Zelda and Toon Link from the Wind Waker series. Each of these new figures will feature “special functionality” in the upcoming title The Legend of Zelda: Breath of the Wild for Wii U and NX.

The four new Amiibo will be available December 2.

The next entry in the Mario Party series seems to have a new focus on getting away from the infamous dice roll. A new mode called Toad Scramble allows all players to move along the board simultaneously, eliminating the turn-based system and making the game play out more quickly. In Toad Scramble, the fastest player to reach a boss will jump into the battle before everyone else. Other features new to the franchise are ally characters, which each come with their own unique attributes, and other new modes like Coin Apple Bob, Mario Shuffle, and others.

Star Rush will support local multiplayer as well as Download Play for up to four players, meaning that only one of four people with 3DSs needs to own a copy of the game in order for everyone to play.

For more on the September 1 Nintendo Direct, check out the full stream here.