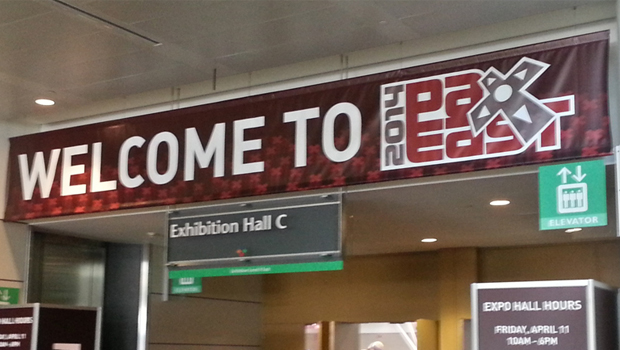 Long Lines, Cosplay, Oatmeal and lots and lots of games. Yes, my friends, I am talking about PAX. This past weekend the tenth East Coast edition of Penny Arcade Expo was held in Boston. I was fortunate enough to get a pass last October in the 20 minutes or so they were available. This is my report, mostly in pictures, of the glory of PAX.

Well, lets get this out of the way. I don’t even know what it is, but I saw this thing:

And I saw lots of this type of thing. Just the thought of how much power was being consumed is astounding.

Some of you may be looking for the latest news on Heroes of the Void, or Borderlands 2. Unfortunately, You are not going to hear about that from me. I am a gamer, but of the cardboard variety. I spent the majority of my time in “TABLETOP HQ.” What the tabletop area lacked in lines and grandiose booths, it made up for with an overflowing game library and intense tournaments.

There were tables as far as the eye could see. Table surface area was abundant, yet the mass amount of people made personal space a little tight. I got to play some games I love and I got to learn some new ones. Most importantly for you, I was able to check in with a number of different game publishers and hear what is up with them. You may recognize some of these names from games that we have reviewed. See the links below.

Mayfair would not be the powerhouse they are without Settlers of Catan. The Catan franchise is alive and well and continues to thrive 19 years after its initial release. For fans, you will be glad to know that two new maps are coming out in the next year. In other high profile news, Mayfair is printing copies of Caverna as fast as they can. The hugely popular game is hard to find at the moment, but should be widely available soon. On display was also the latest expansion for Lords of Vegas, UP!. 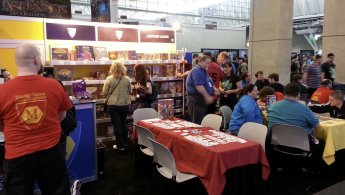 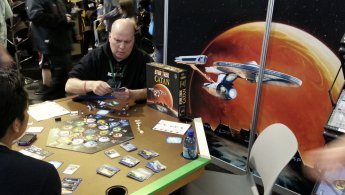 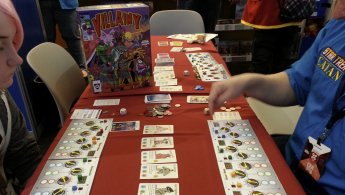 Mayfair has big plans for the coming year. Gearing up for the summer convention season they have a handful of new releases almost ready to go: Villany, a game where players start as nobody villains who aspire to wreak the most havoc and execute their grand master plan. It looks like a drafting, resource management game with very colorful and fitting artwork. Hot Tin Roof, players are trying to get their families of cats back together over the roofs of a city. Players will have to balance achieving their own goal, while not helping their opponents too much. And Bedpans and Broomsticks, a semi cooperative game, where one person plays as the doctors and nurses of a retirement home trying to keep the rest of the players, who are patients, from escaping. While I may be a little concerned with the theme, Mayfair is putting a light comical spin on the game. In addition to new games, Steam players should expect a couple of maps to be released as well.

The fabled Ryan Metzler was at PAX demoing a new game called Evolution. Each player competes to make large and powerful species, all the while trying to survive attacks from other players’ carnivores. The game uses an interesting card driven action system, along with an innovative feeding system, both providing a very different style of game. North Star will be will be launching Evolution on Kickstarter in the near future. Stay tuned, we are going to be doing a full review in the next few weeks.

Recently, Soda Pop joined forces with Ninja Division to make even more awesomeness. Ninja Division will be focusing on production and Soda Pop will continue to design games. Super Dungeon Explore has been getting attention as the Forgotten King Kickstarter is just wrapping up. Soda Pop is very excited about the game, and they have a few (read: many) things planned for the system. With the expansion, different game modes are being explored, everything from Dark Heroes to head on arena scenarios. For those who have the original game, update packs are coming to incorporate the base set with all these new rules. It was pointed out, not so subtly, that there are nine realms in total, and only three have been utilized so far. So fans of Super Dungeon Explore, you can expect more down the pipeline. 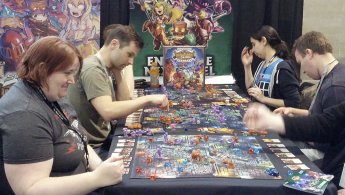 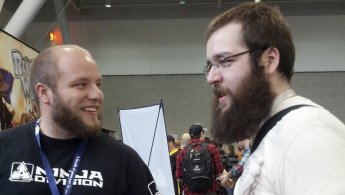 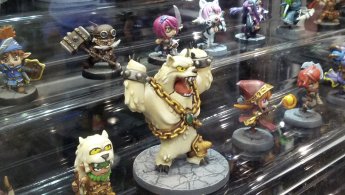 In other Soda Pop news, Relic Knights is shipping out to backers soon and will hit retail early this summer. Relic Knights is an “all in the box” tactical miniatures game. With the game reaching players soon, Soda Pop is excited to set up organized play along with promoting painting contests. Other Soda Pop projects include the miniatures for the Mega Man game and an upcoming title: RoboTec.

Cool Mini or Not
Zombicide

Cool Mini or Not continues to pump out plastic filled goodness. Their latest published game, Rivet Wars, is just now reaching retail after being sent out to backers. They are currently working hard at perfecting the modeling for the airplanes and will be shipping out the kickstarter goodies to backers in a few weeks. Rivet Wars is a light tactical war game with, dare I say it, humorously cute art and minis. From personal experience, it is a great game. Well worth checking out. 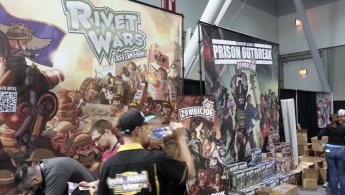 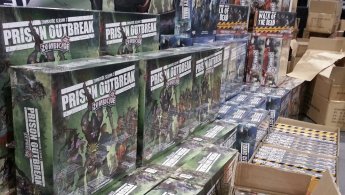 A few months ago, Cool Mini announced their upcoming game ‘Zeno Shift.’ Not much has been said, other than this will be a “different game for Cool Mini or Not.” KaosBall has been shipped to US backers and is on its way to EU backers currently.

Besides all this gaming news, I had a good conversation with Spencer Reeve about the role of Kickstarter in Cool Mini or Not’s business. It was a very enlightening conversation that I will be sharing more about later. Keep your eye out for Kickstarter updates.

As a huge Zombicide fan, I was super stoked to hear that Season 3 is coming to Kickstarter soon!

Back in the day, a long three years ago, Mercs Miniatures released their first game, also called Mercs. This standard scrimmage game laid the groundwork for the epic breakout Myth, a cooperative, adventuring game. Last year Myth was kickstarted to the tune of $920K. With substantial financial backing, Mercs have whole host of small expansions planned to come out every two months for the next year. If people are not getting their fill, Mercs has a full ‘journeyman’ expansion planned to be Kickstarted in the future. Myth looks beautiful, and the free form story driven game play makes it a refreshing take on classic dungeon crawls. 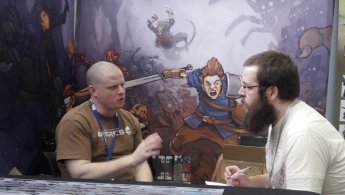 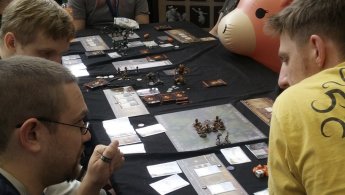 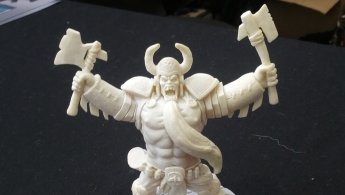 In addition to supporting Myth, Mercs is concluding their funding campaign for Mercs: Recon. Recon takes the assets from the original Mercs game, and refines game play into a cooperative game where teams of specialists perform various special ops.