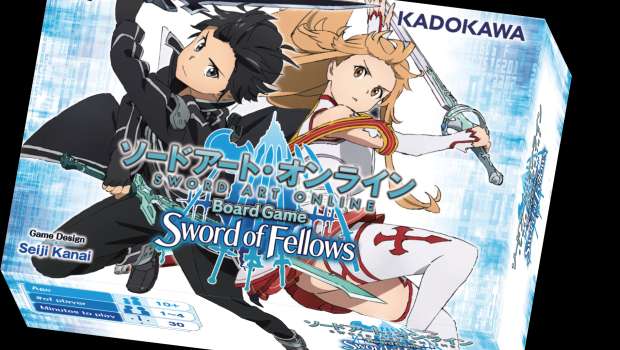 Having an anime set in an MMO universe isn’t unique.  The .hack//SIGN series was mostly set in the MMO.  However, Sword Art Online not only focused on the gameplay world, but also the consequences of the players in the real world.  With two seasons and an upcoming feature film behind it, Sword Art Online is a hot property.  Japanime Games is now bringing SAO to the tabletop, with a Kickstarter campaign landing this month.

Japanime Games is pleased to announce that they will be running a Kickstarter campaign for Sword Art Online The Board Game: Sword of Fellows in late March 2017. This exciting new title has been designed by renowned game designer Mr. Seiji Kanai, designer of ‘Love Letter’ and ‘R-Rivals.’

Players will take on the role of their favorite heroes from the animated series trapped in Sword Art Online’s world of Aincrad. Using sword chain attacks, potions, and equipment cards, players will face a series of deadly enemies on their journey to escape from their virtual imprisonment.

Japanime Games has been working in conjunction with Kadokawa and Arclight Games, to release Sword Art Online The Board Game: Sword of Fellows in July of 2017, making this one of Japanime Games most ambitious Kickstarter release schedules yet. After backer fulfillment, the game will be available through retail, distribution and on JapanimeGames.com. Japanime Games will be teaming up with foreign partners Arclight, Ynaris, GDM Games, and Primigenia Juegos for a worldwide release in several languages.

The Kickstarter will launch a few weeks after the release of the much anticipated Sword Art Online The Movie: Ordinal Scale, coming to theaters March 9th.

Japanime Games President Eric Price had this to say:

“We are excited to work with our partners at Arclight and Kadokawa on such an exciting license in concordance with the release of the Sword Art Online The Movie: Ordinal Scale.”

Even if you aren’t a fan of the anime, the premise behind it is compelling.  Take a look for this on Kickstarter around the end of the month.