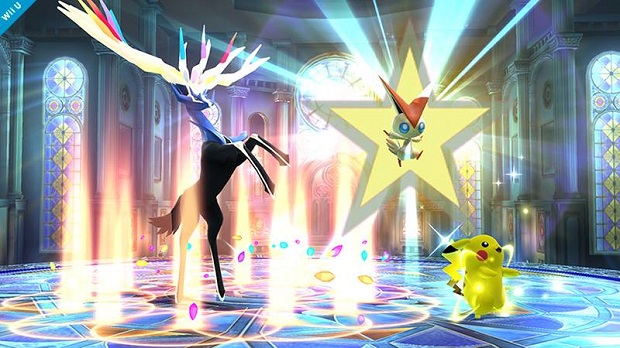 Nintendo has revealed some details on a couple of the support Pokemon that will be in Super Smash Bros. for 3DS and Wii U. Not every Pokemon you can send out using a Poke Ball item negatively affects your enemies, as some will be able to give you some boosted power in battle.

Victini and Xerneas, who debut in Pokemon Black and White and Pokemon X and Y respectively, will help whatever player manages to get them by throwing a Poke Ball during a match. Victini uses Victory Star to increase the power of the user, where Xerneas uses Geomancy to increase the launching capabilities of all fighters, but raises it to a greater extent for the user of the Poke Ball.

Nintendo revealed last week that the 3DS version of Smash Bros. will be getting an exclusive stage based on N’s Castle from Pokemon Black and White. The latest additions to Super Smash Bros. for 3DS and Wii U’s roster includes Robin and Lucina from Fire Emblem: Awakening and the return of series veteran Captain Falcon.

Super Smash Bros. for 3DS is due out on October 3rd, while the Wii U version is set to come out sometime later. For more on both versions, check out our preview from this year’s E3.