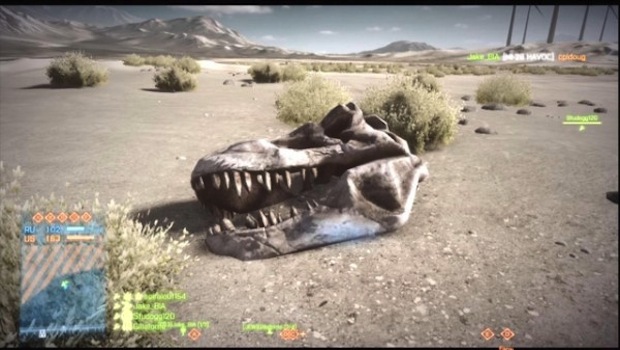 It’s been nearly two years since Battlefield 3 first hit the shelves in October 2011, but gamers thought they had found nearly every easter egg Dice had to offer – until now. With the last expansion pack, End Game, there was a definite emphasis on dinosaur-related content, such as a T-Rex skull, and a pterodactyl bopping around the skies on Nabandan Flats. This time, they decided to take a slightly different approach by hiding an audio recording within character chatter while spotting AA.

Deemed “Battlefield 3’s rarest easter egg,” by such publications as PC Gamer, this thing is so hard to find that no one can even replicate it. Now that’s well-hidden. An intrepid explorer known only by his YouTube handle of JackFrags (check out his channel, he’s got some awesome BF4 footage to show off) was able to record the microscopic clip on film, but even if you knew exactly what you were looking for, this thing would be pretty easy to miss. Basically, it’s a shout-out to a former Dice developer (and lead designer of Battlefield 3) by the name of David Goldfarb (insert Requiem for a Dream reference here). Polygon reported almost exactly one year ago on his leaving Dice to take up a new post as the creative director on Payday 2 over at Overkill Software.

Check out the video below for some interesting backstory, including JackFrag’s rather impressive sleuthing to find the secret voiceover.