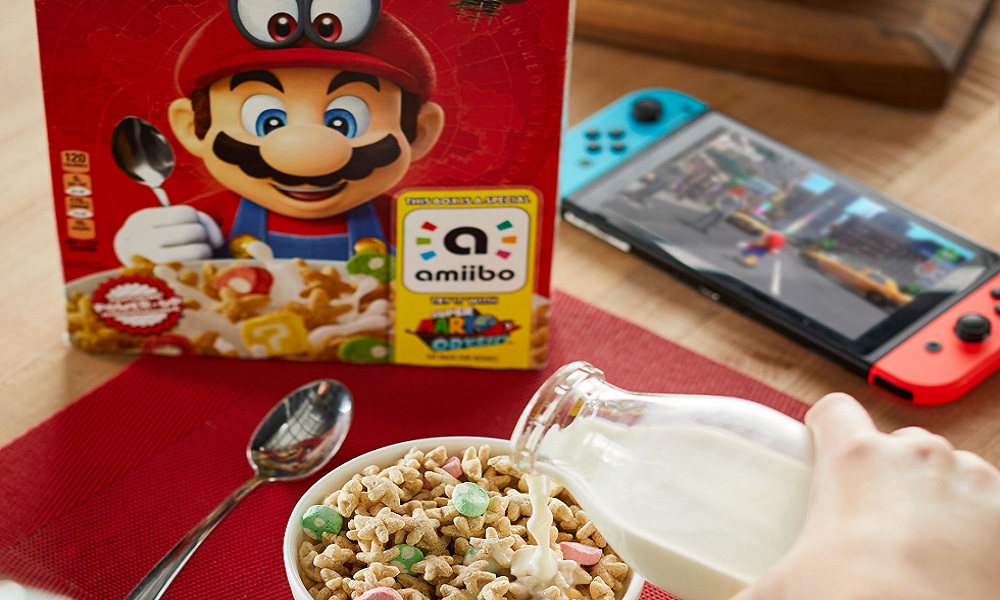 As if Cappy capturing a horde of goombas isn’t enough to keep your attention glued to Super Mario Odyssey, Nintendo officially announced the release of a new Super Mario cereal that will make its debut in supermarkets December 11. Each cereal box will also act as a small Amiibo card, granting gamers some special items for Odyssey.

“This powered-up partnership with Kellogg’s is another exciting way for us to expand the Nintendo brand in unique and creative ways,” said Tom Prata, Nintendo of America’s Senior Vice President of Strategic Initiatives. “We are always looking for new opportunities to bring smiles to people of all ages, and this is a fun way to kick off the day.”

With Super Mario™ Cereal, Nintendo and Kellogg’s® have teamed up to take fans on a breakfast odyssey that will continue long after the cereal box is empty. In addition to collectible Super Mario Odyssey™ box art, each Super Mario Cereal box functions as an amiibo™ accessory, making breakfast a more playful experience.

The limited-edition cereal box will begin hitting store shelves across the U.S. as early as Dec. 11. Those playing the Super Mario Odyssey game can tap the cereal box on the Nintendo Switch™ system, like you would an amiibo, to receive gold coins or a heart in the game. Even the cereal itself has a Super Mario twist, with colorful power-up marshmallows and a blast of mixed berry flavor in every box.

“We are thrilled to pack so much fun into one box of cereal,” said Brad Schwan, Senior Director of Morning Foods Marketing. “The package adds value and excitement for fans, with marshmallow shapes in the cereal inspired by Super Mario power-ups to tie the theme together.”

While the items aren’t game-breaking, getting the same functionality of some common Amiibo in Super Mario Odyssey should be incentive enough for Mario fans to grab a box of this limited edition cereal. (Also, Mario food is the best food.) Check out our review of Super Mario Odyssey here, and stay tuned for more news here on Gaming Trend.