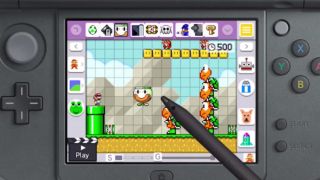 Announced during today’s live Nintendo Direct video, Super Mario Maker for Nintendo 3DS will come with 100 built-in courses and the full toolset of items and blocks from the Wii U version – with the exception of the Mystery Mushroom and all Amiibo costumes. Footage of the 3DS game showed gameplay of both the level editor – which is mapped to the console’s bottom screen – and regular play with game styles from Super Mario Bros, Super Mario Bros 3, Super Mario World, and the New Super Mario Bros series.

Players will be able to play levels made on the Wii U version, though not all levels will be compatible with the 3DS version. Additionally, in the “spirit of spontaneity,” players won’t be able to search Course IDs directly, but will instead discover courses randomly through various game modes. Players will be also be able to create and play levels collaboratively via local wireless connection. Courses can be shared with friends locally or via streetpass.