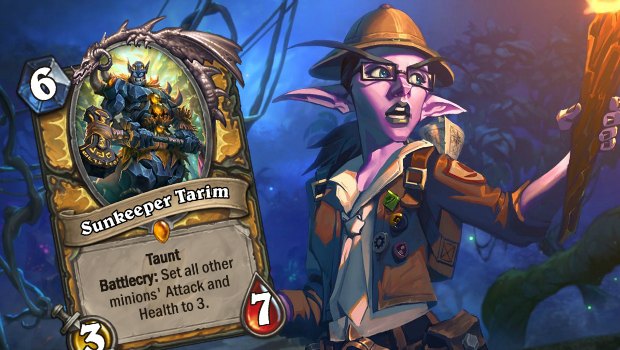 A new card from the upcoming Hearthstone expansion, Journey to Un’Goro, has been unveiled.

Revealed by IGN, the card — named Sunkeeper Tarim — is a 3-mana legendary Paladin minion with 3 attack and 7 health, and reads: “Taunt. Battlecry: Set all other minions’ Attack and Health to 3.”

Tarim shares a functional likeness to Keeper of Uldaman — a 4-mana Classic Paladin minion with the same Battlecry — but with the added bonus of Taunt and three extra health points (in exchange for the 1-card restriction of Legendary). This could make Tarim a more effective defensive card than Uldaman, especially when an opponent has two or fewer minions on their board.

Token Paladin decks might also benefit from Tarim’s effect as an offensive move; the player could fill their board with Silver-Hand Recruits with Paladin’s hero power, then drop Tarim and turn the 1/1 Recruits into 3/3 minions, protected by Tarim’s Taunt and 7 health. While this was obviously an option for Paladins running Keeper of Uldaman, the League of Explorers Classic card will be relegated to Wild-only formats once Journey to Un’Goro launches, meaning Tarim will be the only playable card (in Standard playlists) with this unique Battlecry ability.

Sunkeeper Tarim is the latest card reveal from Hearthstone’s next expansion, Journey to Un’Goro. The update is expected to launch in April, and with it, a new rotation in the Standard format, meaning cards from Blackrock Mountain, Grand Tournament, and League of Explorers will no longer be playable in Standard playlists. The rotation shift, which brings in the “Year of the Mammoth,” will also mark the end of Classic cards like Azure Drake and Sylvanas Windrunner in Standard playlists.