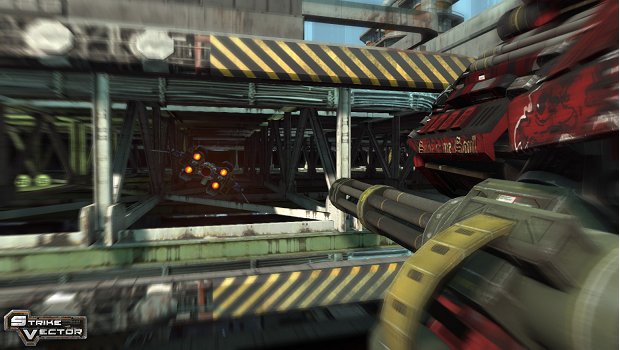 Back in 2003, I fell in love with the Playstation 2 title Battle Engine Aquila.  It was a strange title for the time, and I doubt many people played it, but it had the coolest premise: you control a walking tank that would transform into sleek fighter at the touch of a button.  Not that this is new ground--Robotech operated on the same premise and that dates back to the 80s--but I always enjoyed how smooth the transition was.  One second you’re plodding on the ground firing your heavy weapons, the next you lift into the air, picking up speed as you go.  Strike Vector, a new multiplayer shooter/flight sim from Ragequit Corporation, scratches that same itch.  To use the developers own words:

With a distinct old school feel, reminiscent to games such as Crimson Skies, Quake 3 and Unreal Tournament, Strike Vector will let you test your reflexes and skills against your friends. Team flight and mutual assistance is required to fulfill your missions but individual aiming and piloting skills are also mandatory.

I really can’t describe what it is that makes this one look so appealing, folks.  It might be the blistering speed.  It might be the shockingly bright colors.  It might even be that the game allows you to do a barrel roll.  You’ll just have to scroll down to the video below and watch for yourself.  Strike Vector is planned to come out in early 2014 on Steam.