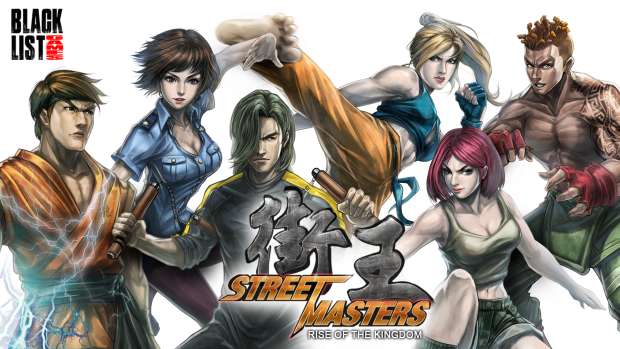 I can still remember playing side-scrolling beat-em-up games in the arcades.  Double Dragon and Final Fight were staples amongst the many machines populating the room.  Later the X-Men, Teenage Mutant Ninja Turtles, Dungeons and Dragons, and other characters were fighting their way to justice.  While we have had fighting simulated in one-on-one fights in games like BattleCON and EXCEED, we haven’t had many side-scrolling games simulated.  Blacklist Games is aiming to change that with their upcoming Kickstarter.

Street Masters: Rise of the Kingdom combines the concept of a tactical combat board game with the flexibility of an intricate card game. Acclaimed designers Adam and Brady Sadler (The Walking Dead: No Sanctuary, Warhammer Quest: The Adventure Card Game) have developed a streamlined system that focuses on modularity and action, with fighters, bosses, rivals, allies, and stages forming a “sandbox” for players to mix-and-match, creating their own epic showdowns.

Street Masters: Rise of the Kingdom offers both an action-packed “Arcade Mode” where players completely customize their experience with any combination of fighters, bosses, and stages, as well as a narrative campaign “Story Mode,” where the fighters’ victories, defeats, and choices help unravel the lore of the game. In “Story Mode,” victory means helpful perks, while defeat inflicts dangerous penalties.

“The first thing we wanted to focus on was translating the thrill and excitement of old beat ‘em up video games to a quick-playing tabletop experience,” said Adam and Brady Sadler, designers of Street Masters: Rise of the Kingdom. “We went with card-driven gameplay because it encourages independent decisions among the players and allows for cool thematic abilities that are unique to each fighter. The art and the miniatures are really getting us excited to play the final product! We love the theme, we love the core game system, and we love the modularity and various combinations that can be thrown together. We definitely could not be prouder of this game!”

The combination of cards and dice should give Street Masters: Rise of the Kingdoms a lot of variety.  These guys have worked on some great games as well.  Look for it on Kickstarter next week!