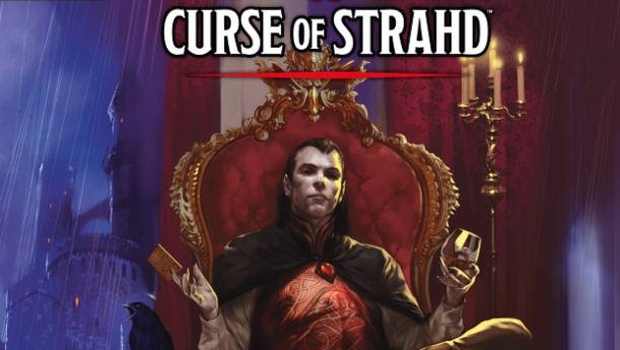 There was a time when vampires were seen as scary, blood-sucking creatures.  However they lost favor to zombies when they started to sparkle in sunlight.  Wizards of the Coast is looking to turn the trend around as they release Curse of Strahd.

Wizards of the Coast today announced the newest Dungeons & Dragons adventure, Curse of Strahd™, is now widely available at retail stores around the country! Designed for fifth edition of the D&D tabletop roleplaying game, Curse of Strahd is a new gothic horror-themed adventure set in the cursed land of Barovia, including the iconic Castle Ravenloft. The new release was written in collaboration with Tracy and Laura Hickman, the authors of the original Ravenloft adventure.

In addition to Curse of Strahd, there are many other opportunities for D&D fansto experience Ravenloft, including:

You’re invited to share this news with your readers and assets for Curse of Strahd adventure can be found here. For more information on Dungeons & Dragons visit www.dungeonsanddragons.com

Unravel the mysteries of Ravenloft in this dread adventure!

About Curse of Strahd
Heroes from the Forgotten Realms and other D&D worlds can easily be drawn into Strahd von Zarovich’s cursed land. Once there, they must contend with the horrors of Barovia. Its people are melancholy, misshapen and grotesque, living in fear of the wolves and other creatures that serve Strahd’s evil will. The only hope for the trapped adventurers is to heed the warnings of a mysterious fortune-teller named Madam Eva. Drawing random cards from her tarokka deck, she directs adventurers to search Strahd’s domain for artifacts and allies to help defeat the master of Castle Ravenloft. That is, before he orchestrates your demise for his amusement and feasts on your terror.

There’s also the Castle Ravenloft D&D Adventure Game which is a ton of fun and in print as well.  You might find it odd going against a vampire in the world of D&D, but try it out.  I admit I was pleasantly surprised.