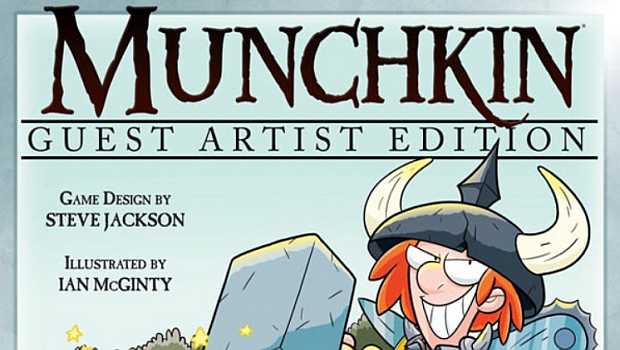 There likely isn’t a gamer in the civilized world that has not heard of Munchkin. The game is celebrating fifteen years of incredible staying power with anniversary editions of classic deluxe sets featuring reworked art by noteworthy contributors.

In 2016, Steve Jackson Games will be joining fans everywhere in celebrating Munchkin’s 15th anniversary. The festivities start in January with the first of several Deluxe-format Guest Artist Editions: Munchkin Guest Artist Edition, illustrated by Ian McGinty. McGinty is known for his work on the Adventure Time and Munchkin comic books from BOOM! Studios.

In March, the fun continues with the Star Munchkin Guest Artist Edition, illustrated by Len Peralta. Len has previously illustrated the Munchkin The Guild booster and is also known for his own line of Geek a Week trading cards and co-creating the comic Ten State.

Phil Reed, Steve Jackson Games CEO and originator of the Guest Artist Edition plan, said, “Munchkin‘s a visual beast, with half of the humor of the game deeply connected to John Kovalic’s art. This gives fans a chance to re-live the silliest of cards all over again with new visual interpretations of the classic Munchkin jokes.”

The Guest Artist Edition series will continue throughout 2016. More releases will be announced over the coming months at sjgames.com and across our social media presence.

I admit that I am fond of the cleverness of both the jokes and the artwork, and the game in general is always an attractive, lighthearted go-to. I understand the need to keep churning out new product, but I expect we’ve already reached a point of supersaturation with the Munchkin series.