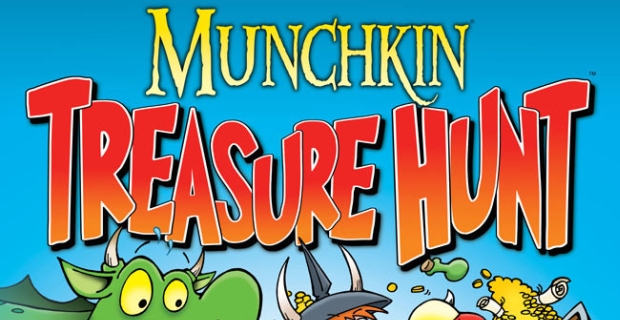 Steampunk, zombies, and treasure, oh my!  Steve Jackson Games has a wide variety of games, from fillers to strategy.  They recently announced their October releases, and there’s a big dose of Munchkin.

While Munchkin Steampunk Deluxe releases in many local game stores in August, it’ll see a wider release to the hobby in October. Then, in 2016, you’ll start to see it filter into stores like Target and Barnes & Noble.

Grab your gears, put on your top hat, whack the monsters, and grab the treasure . . . with the power of SCIENCE! Munchkin Steampunk Deluxe brings the zaniness ofMunchkin to the pseudo-Victorian steampunk era. Bully!

Munchkin Steampunk Deluxe comes with a board and standies for tracking your level, and is illustrated by Phil Foglio!

Munchkin Treasure Hunt used to be exclusive to Toys ‘R’ Us, but in October you’ll be able to find it in your local store!

Be careful, though. Monsters live here, and they don’t want you taking their stuff. Too bad! Chase away the monsters, grab that loot, and run! Get the most treasure and win!

It just doesn’t feel like a dungeon worth exploring without hordes of undead! Munchkin Undead adds 15 new monsters, curses and items all dealing with the formerly living. Get your pointy sticks and your chainsaws ready because it’s time to kill them all over again!

You can’t clear thousands of dungeons without making a few Frenemies . . . so that’s what we did! As long as your Imaginary Frenemies are safely stored inside their blister, they help you in combat . . . but if you release them to get at the cards inside, you can’t use their rule anymore. Oh, temptation!

As long as this package remains unopened, you may keep your Imaginary Frenemies in front of you as a +2 combat bonus. It cannot be lost to Curses, Bad Stuff, or theft, and stays with you even if you die.

At any time, you may open the package, releasing your Frenemies, and draw as many Treasures as there are players in your game. Keep one of the Treasures for yourself and give each other player one each.

Sign the two Door cards inside (Yes! With a REAL pen! In permanent ink!) and put them in your hand as well. When you play a card that you have signed, it has double effect. Save this card so you remember this rule in the future!

The best Munchkin fights are the ones where everyone plays cards to keep the levels bouncing up and down! But it can be hard to keep track. Now you’ll never have to stop and recount again!

With the Munchkin Steampunk Kill-O-Meter, whenever a card hits the table, you turn the dials to keep track of your new total. You don’t have time to stop and count when you’ve got science to do . . .

Munchkin isn’t for everyone, but you can’t say that they don’t have a wide variety of options.