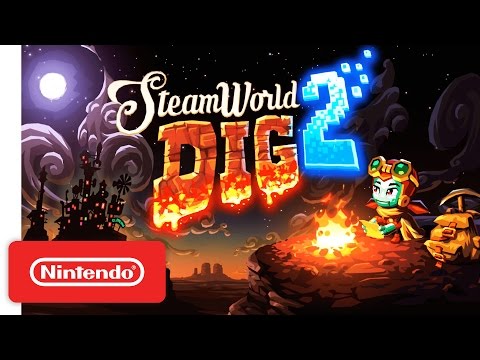 Nintendo revealed SteamWorld Dig 2 today, during its Nintendo Switch Nindies Showcase, and it looks very much like SteamWorld Dig.

Though most SteamWorld games tend to branch off in new directions with each new title (especially in terms of gameplay genre), SteamWorld Dig 2 returns to the same Metroidvania-style gameplay and a returning cast of characters, starring Dorothy from the original 2013 game as the new protagonist.

In an interview with IGN, developer Image & Form’s Brjann Sigurgeirsson states that SteamWorld Dig 2 was an endeavor to work with some of the many ideas that didn’t make it into the original game.

“Ironically, it was a bit frustrating to see all those great reviews when we’d had so much more planned for it initially,” said Sirgurgeirsson. “So I think we knew we’d revisit the Dig era rather sooner than later.”

SteamWorld Dig 2 will be coming first to Switch this summer. We also heard about a bunch of other indie games coming to Nintendo’s transforming console this year, including Yooka-Laylee, Stardew Valley, and loads more.