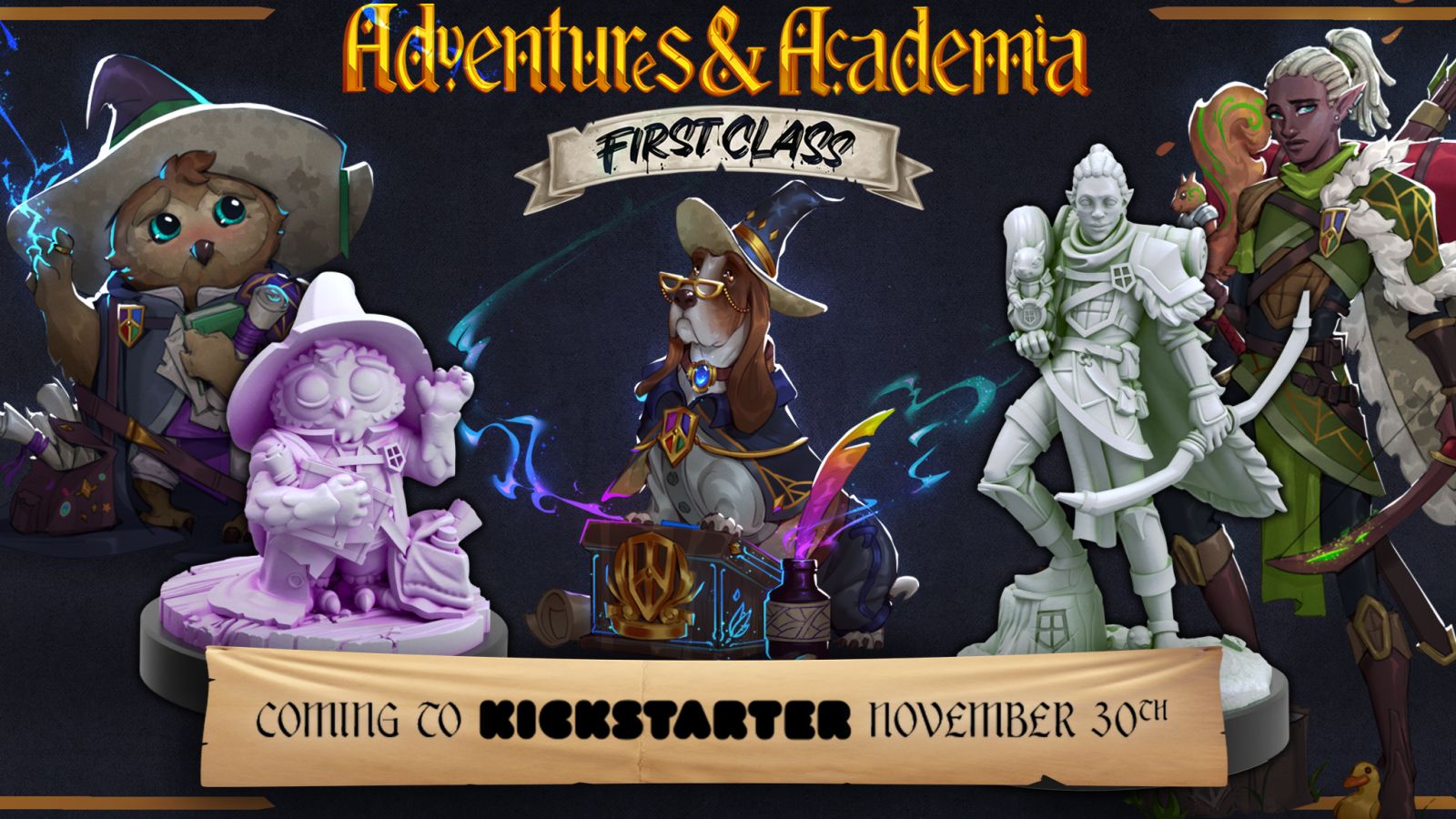 Steamforged Games, under their brand Paintings & Polygons, just announced a 7-day only Kickstarter campaign for Adevntures & Academia: First Class featuring magical college characters for use in 5e roleplaying games. You can view the Kickstarter here. Read below for more details:

Based on a concept from Steamforged sculptor Thomas Lishman — who recently gained acclaim for his work on the Lucien miniature for the hugely popular web series, Critical Role — Adventures & Academia: First Class is the first product in an exciting new roleplaying setting centred around a magical college.

Sculpted by Steamforged’s ENNIE award-winning and award-nominated sculpting team, Tom’s vision has resulted in a range of highly detailed 5E-compatible miniatures depicting students attending a magical college to learn how to become adventurers. 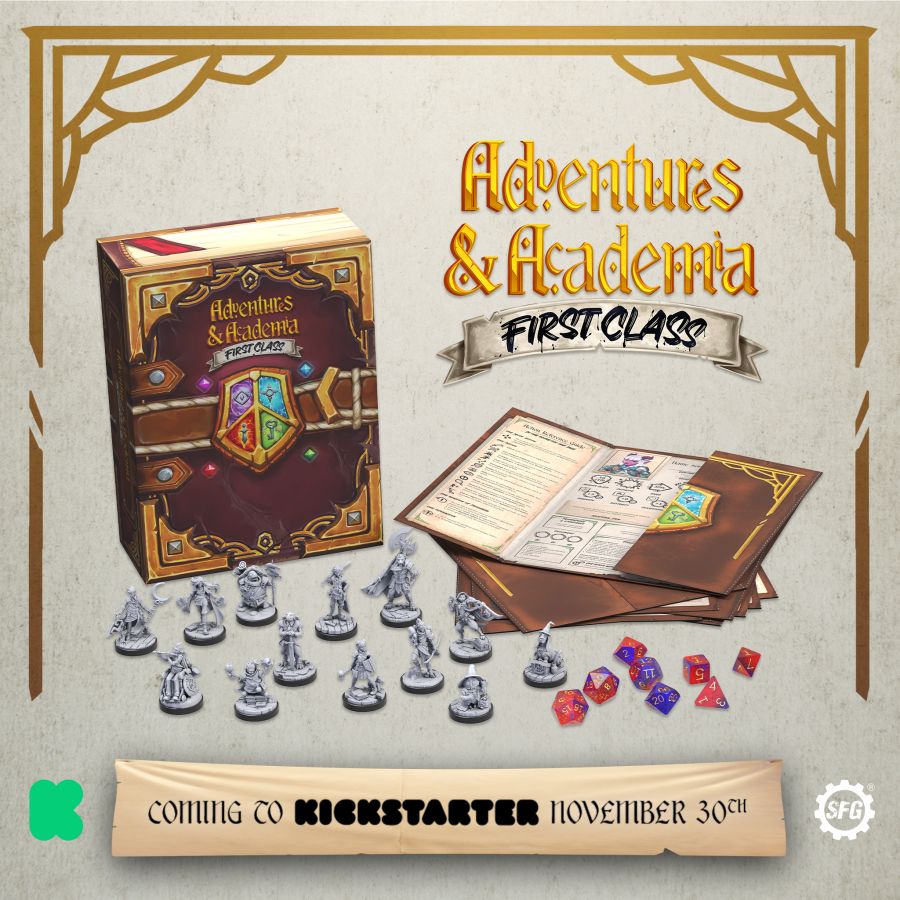 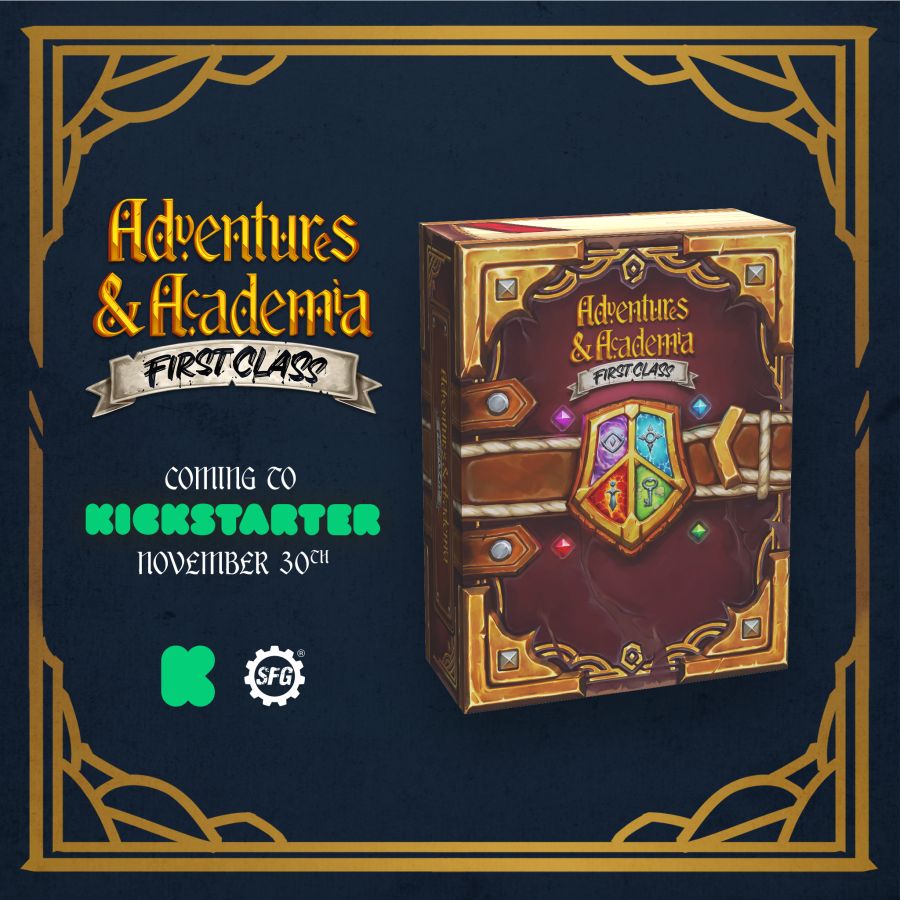 The first two miniatures represent students of the druid and monk classes. Their teacher, a magical basset hound also revealed today, is an Easter Egg crossover for Animal Adventures fans. The Adventures & Academia: First Class campaign will include 13 unique characters in total, each with their own biographies and character art, with the rest as-yet unrevealed. However, hints at the upcoming minis can be seen in the teaser trailer released alongside the first look at the logo.

“Adventures & Academia is something Tom and the team have been working on for a while now, and we’re all incredibly excited to see where it leads. At Steamforged, our aim is to encourage a creative environment where people feel supported in their ideas and able to try new and adventurous things. Painting Polygons, our sub-brand, gives us the platform to do that, letting us support creative visions and bring ideas to life. It’s a genuine pleasure to work with a team full of such talented people!” – Mat Hart, Creative Director

“A while back, when planning a roleplaying campaign set in a magical school, I noticed there was a real lack of minis out there to represent younger magical characters. With more young people getting interested in roleplaying games, it seemed strange for their options to be so limited. That immediately sparked an idea that snowballed, and the first First Class concept minis came soon after.

Now, players will have a lineup of unique characters so individually awesome that the hardest decision will be picking one to play! Because the First Class minis are designed for a wide audience, not only do they need to look great on the tabletop, but they also need to be paintable by people of all experience levels. Bold, chunky shapes and striking silhouettes will ensure even newer hobbyists can feel comfortable picking up a paintbrush.

From the design of the minis to the magical school setting that inspired them, these characters are designed to inspire — and who knows where the world of Adventures & Academia will go!”