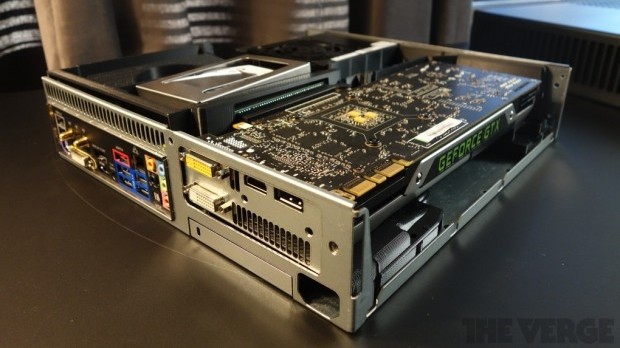 This November we will see the launch of two next-gen consoles, the PlayStation 4 and the Xbox One—but the buck doesn’t stop there. Valve’s Steam Machines are closing in fast, and in January, at CES 2014, we will see retail versions of the Steam Machines and the games to go along with them.

For now, no manufacturing partners have been announced, but Valve has revealed their own Steam Machine prototype. Valve has put the Steam controller into the hands of developers before, but this is the first glimpse we got of the box itself.

It will measure just over 12 inches wide and just under 3 inches tall, making it roughly the size of an Xbox 360; but despite it’s size, Valve was able to design it in a way that it could fit a full-sized CPU, as well as, the current bad boy of graphics cards—the Nvidia GeForce GTX Titan. By mounting the power supply, the CPU, and the graphics card in a way that each component faces a different side of the case, they can cool themselves more efficiently, and achieve the power of current mid- to high-end PCs, but from a much smaller rig.

Valve seems to be targeting their 65 million existing Steam users and focusing on making integration and implementation of the Steam Machines and SteamOS as intriguing and seamless as possible. Designer Greg Coomer wants to make sure Steam customers know that Valve is not trying to push them out of their comfort zone:

There’s a little bit of consternation around our most dedicated customers that we might try to shuttle them into a different room in the house. That’s not what we’re trying to do at all.

Steam Machines, SteamOS, and the controller all come together to create one very interesting package. There is still much to learn about what lies in Valve’s future, but the gaming industry won’t have to wait long to see what happens. Gaming Trend will bring you all the latest news as it breaks in January 2014.