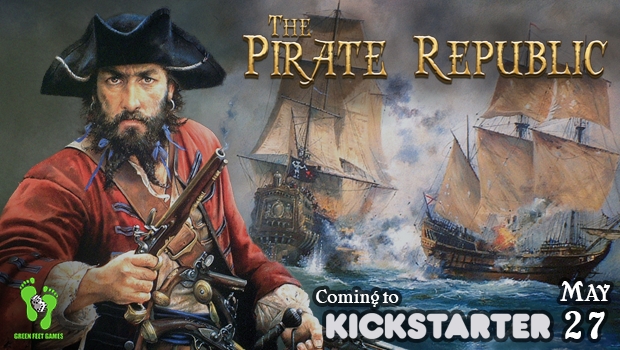 While pirates are a theme that has been covered in gaming, it hasn’t been overdone to the extent that zombies, spare marines, or high fantasy groups have been.  Green Feet Games is a new publisher that will be launching their pirate game on Kickstarter at the end of the month called The Pirate Republic.

United States Special Operations Veteran, Tom Butler, was double dog dared by his children to make his own board game. He comes to Kickstarter to seek funding, and just as important, fulfill his kid’s dare in his new game, The Pirate Republic. Game lovers seeking a cartography engineered game board, Pirates from the historical time period, high seas combat, deck building, dice rolling, and wily saboteurs, will feel right at home in The Pirate Republic.

The Pirate Republic will launch on Kickstarter with the full art and design complete for the base game. The Kickstarter campaign will feature the game at $69 *shipping not included for gamers in the US, Canada, and the European Union, as well as Asia and Australia. The game comes with a money-back guarantee to all Kickstarter backers.

It is 1713. After a decade of war, a rare peace comes to the Spanish Main but peace has its consequences. With thousands of demobilized sailors, piracy explodes in the West Indies. A small group of pirates (Black Sam, Calico Jack, Anne Bonny, & Blackbeard) form themselves into a Flying Gang. They desire fame and fortune and self-governance by building their own republic free from the constraints of kings, queens, and imperialism. Who will prevail? This loose band of outcasts or the European colonial powers?

The Pirate Republic is a semi-cooperative, thematic adventure where the sea is your territory, anyone on or near it, your prey. Each player represents an infamous pirate captain working to complete collaborative and secret mission objectives over four rounds of play to bring an end to European imperialism.

A game of The Pirate Republic has captains working together to explore the New World, engage in sea and land combat, plunder Spanish treasure fleets, and conquer heavily defended colonial territories.

Are you ready to forge the Pirate Republic? Transport yourself to a time of conquest & the lure of riches, indomitable spirit & fat treasure galleons, pirate utopias and watery graves.

It certainly sounds ambitious, but maybe the mixture of different gameplay types will help set this game apart.  They claim it takes about an hour for two plays and around two hours for four players, so it sounds like it plays very tightly.  Be on the lookout for this on Kickstarter on May 27.