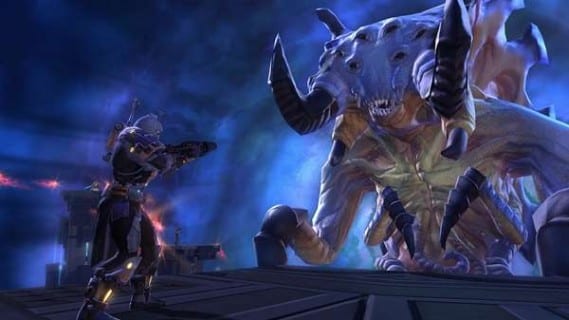 For all the Force-users out there who just can’t get enough of the galaxy far, far away more good news is coming your way. Star Wars: The Old Republic is getting another large update called Terror From Beyond, which will include new adventures, gear, and customization options.

“Operation: Terror From Beyond is an all-new unique group combat experience located on the remote world of Asation, where an ancient alien race known as the Gree are rumored to be guarding mysterious and dangerous archaic technologies. The Gree’s secrets have suddenly caught the interest of the Dread Masters, a treacherous group of Sith Lords who have discovered the key to unlocking the ancient Gree Hypergates. Once this portal is open, a passageway to an unknown place will unleash an unspeakable horror that will become a threat for the entire galaxy.”

The DLC is geared towards high level players and should only be attempted by the most powerful heroes in the galaxy. Players can start playing the DLC included in update 1.4 update today. May the Force be with You.