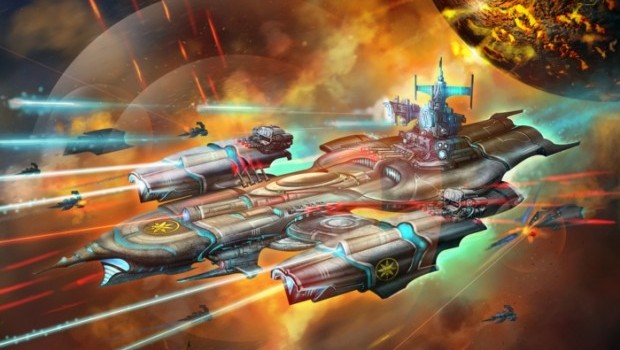 While many deck-building games have a fantasy theme, we really haven’t seen one that introduces us to space.  During Origins I was able to check out a deck builder called Star Realms, created by one of the developers of Ascension.  Now I am happy to announce that Star Realms is now on Kickstarter.

October 4, 2013 – Framingham, MA – White Wizard Games LLC, the company created by Magic: The Gathering Hall of Famers Darwin Kastle and Rob Dougherty (developer and co-founder of the Ascension deckbuilding game), today announced a Kickstarter campaign to launch their new Star Realms deckbuilding game. The goal is to raise $20,000 to fund the final stages of production for this highly anticipated space combat game and to get it into the hands of backers in time for the holiday season. The Kickstarter campaign finishes on November 2, 2013.

“Star Realms has beautiful art and graphic design. The physical game packs up into a small, portable deck box that you can bring with you anywhere. It’s a great product at a great price, and most importantly, the game is incredibly FUN to play”, said Rob Dougherty, co-creator of Star Realms. “We can’t wait to get this amazing space combat game out. We just need a little help from the Kickstarter community to make that happen.”

Star Realms sets itself apart by making cards more useful faster.  All of the cards are useful, and the more powerful cards are worth more than their cost, helping to speed up gameplay.  It also features an Ascension-style selection, which I really enjoy.  The four factions are all different, and each one has different types of special abilities.  It’s easy to learn, and you just need a way to keep score and a place to play.  I had a lot of fun playing this, and I highly recommend going to their Kickstarter page and supporting them.