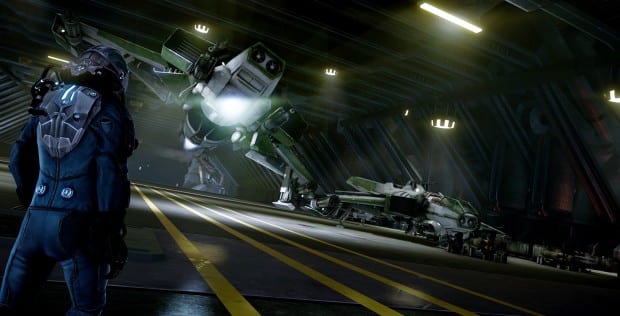 I grew up on games like X-Wing, TIE Fighter, Colony Wars, and Decent: Freespace. I loved flying around in space, taking out bad guys, traveling to distant planets. I would pretend I was actually a part of this fiction, helping the Rebellion defeat the evil Empire (or vice versa), acting out one of my biggest fantasies: being able to explore the vast reaches of space. After this huge Renaissance of space simulators back in the 90s, their popularity waned and development on them virtually ceased. That’s not to say they disappeared entirely; we got games like X3 which enjoyed a small amount of success, but seeing any sort of big-budget, hardware-pushing space sim was a long shot at best.

Chris Roberts, creator of the hugely influential Wing Commander series, aims to change all that.

Star Citizen is an incredibly ambitious prospect. A full single-player campaign that can be played offline or co-op with friends, and complete open-world multiplayer experience with no subscription fees or pay-to-win structure (they’ve stated that there may be some paid items in game, but it wouldn’t be anything game changing, and it wouldn’t be anything you couldn’t earn with a little bit of hard work). Both of these experiences are inexorably linked as well: finish the single player campaign, and you get a little starting cash for multiplayer. Or forgo single player altogether, and jump right into the online game, working your way up from the very bottom. Roberts wants to do all of this without sacrificing visual fidelity, so his team is building the game on CryEngine 3. This allows the developers to create enormous senses of scale and detail, with things from the outside of a Captial-size ship to have the same level of detail and nuance as the inside of your cockpit.

The website for Star Citizen has a few videos to check out which detail some of the overall concepts of the game, and I have to say, it looks stunning. While the player animations still look a bit rough, the actual ship design and level of detail is astounding, and has to be seen to be believed. You’ll have the ability to man a turret on a starship over a kilometer long, run from there to your ship, jump in, and fly off into battle without any loading screens whatsoever. While still a ways off from actual release (it’s currently slated to release sometime late 2014, with alpha and beta access available earlier to project backers), if Chris Roberts can deliver on half of what he’s saying he plans on doing, this game looks like it will fill a void in my gaming life that has been sorely missed.

If you’re interested in backing the project, there are two options: directly on the game’s website or on Kickstarter. While the “early adopter” price of $30 is gone from the main website — which gets you a digital copy of the game, access to the alpha and beta, some in-game credits, and an actual physical “Citizenship” card — it’s still available on the Kickstarter page, so you can still get it for the cheapest price available there. Go to the website, check out the videos, drop some cash, and join us in waiting. It’s been a long time coming, and I can’t wait to get back to exploring the stars.