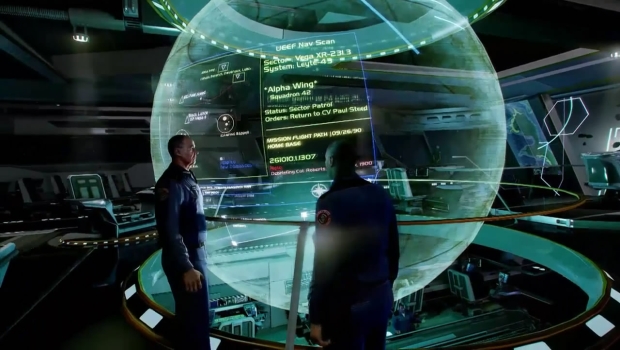 Chris Roberts and Cloud Imperium Games have announced a new way for would-be star captains and designers to contribute to the incredible looking title, Star Citizen.  Called “The Next Great Starship” is a modding competition whereby teams of up to three people can build a spaceship that will become part of the final product.  Oh, not enough? How about a cash prize of $30,000 courtesy of Alienware, AMD, Autodesk, Crytek, Cologne Game Lab, Wacom and YouTube?  Thought that might nab your attention.  Here’s what you need to do:

Teams can register for The Next Great Starship October 31 through December 31. A preliminary challenge involves the making of a fully designed wave particle cannon, submitted via a YouTube video to a nine member judging panel including Chris Roberts and other members of the CIG design and art team, Crytek and even some to-be-named celebrity judges. Those initial entries will be narrowed down to a final 16 and one of the 16 will be voted on by Star Citizen backers. Then those 16 teams will embark on making their Starship entries. Beginning January 31, 2014, episodes of The Next Great Starship will air once a week on the Roberts Space Industries™ (RSI) YouTube channel with each team providing a work in progress update to the judging panel. Judges will eliminate teams down to a final two which will compete live in front of the judging panel and the community during the final episode that takes place June 8 in Los Angeles.

“Our fans have been clamoring for a way to get even more involved in the making of Star Citizen and I think we’ve found the ideal solution,” said Chris Roberts. “What better way to become part of the game than to create a spaceship that you and your friends can actually fly and take into battle. The winners of this contest will have to travel through an amazing process to get to the end, but there will be no doubt after navigating the weeks and months of tough competition that these three individuals will deserve the crown as designers of The Next Great Starship.”

The grand prize is 30k, but there are more prizes beyond that.  Below we’ve got the full list of goodies, including tablets, laptops, copies of Autodesk, and videocards!   Check out the goodies below and we’ll keep you posted on the game as it develops.

For more information about The Next Great Starship and to enter the competition (beginning October 31) please go to www.RobertsSpaceIndustries.com.