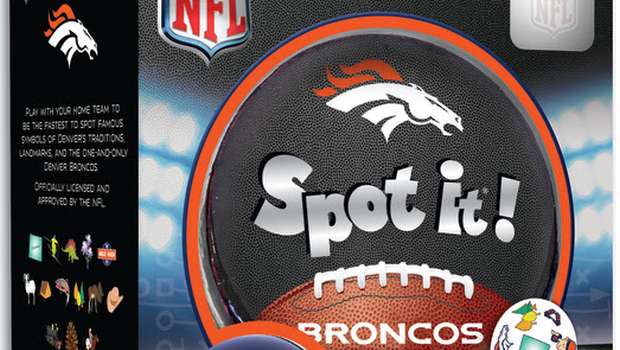 The Spot It! series has been a great family game that’s been around since 2009.  It’s easy to teach and play, and sometimes the kids can be better at it than the grown ups.  A few themed versions have been released, but MasterPieces Puzzles have announced that they will be releasing sports with specific teams across all major sports leagues.

MasterPieces Puzzle Company today announced that it has entered an agreement to combine its new license for the game, Spot it! with certain professional and collegiate sports organizations.

MasterPieces aligned with Asmodee for the Spot It! license and then “teamed” up with The National Football League, National Hockey League and NCAA to “fan”-chise the popular card game. In addition, MasterPieces is currently distributing the Spot It! Major League Baseball version for Asmodee.

David Rolls, President of MasterPieces, said, “The addition of a great game like Spot it! in sports versions gives us an elite team of products that all fans are going to love.”

Each version of Spot It! includes the teams in each professional sports league, and most of the major collegiate sports athletic programs. Graphics in the new Spot It! Games will feature team logos as well as sport-specific related graphics, including equipment, some team mascots and other familiar icons.

Licensing Manager Simone Elliott at Asmodee North America explained, “We are very excited to work with MasterPieces to expand our line of Spot It! games in the world of sports. Their expertise is a notable asset in further developing the connection between tabletop games and sports fandom.”

Packaged in special collectible sports tins, the new Spot It! sports editions (MSRP $14.99 each, for 2-8 players, ages 6 and up) maintain the same game mechanics and play strategy that has made Spot It! one of the world’s most popular games in recent history.

Every Spot It! game contains 55 circular cards. Each of these cards has eight different symbols on them. Each of the cards has exactly one of its symbols in common with each other card in the game. There are many different mini-games that can be played with the game, but the heart of Spot It! is trying to find the one common symbol shared between two cards before your opponent does.

I’m sure there are plenty of sports memorabilia collectors who will be interested in these.  Be on the lookout for these special versions soon.