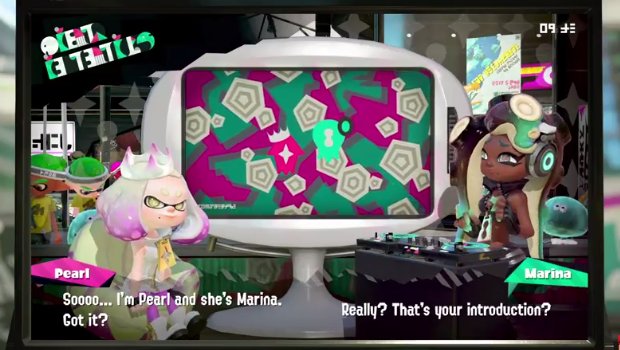 This morning’s Splatoon Direct unveiled a number of new gameplay features in the upcoming Splatoon 2, as well as returning elements with minor changes. This article details the former.

The first part of the video dealt with gear and weapons. Unlike in the original Splatoon, Chargers (and presumably Splatlings) can hold a charge for a short time while swimming through ink, allowing you to charge up from behind cover, shift to squid form to get into position, and then unleash a blast of ink immediately upon shifting back to humanoid form. As mentioned in our First Impressions piece based on the Global Testfire, Rollers now fling ink in a longer, thinner line while jumping, as opposed to the wide arc you get while grounded, and the Splat Dualies enable players to perform dodge rolls. The first previously unannounced main weapon, the Clash Blaster, is like a faster version of Splatoon’s Rapid Blaster, featuring a much higher rate of fire than a standard blaster at the cost of power and range. Next, the Flingza Roller swings more quickly on the ground but takes longer while jumping; however, this extra wait time is rewarded with a farther ink fling than normal. The Goo Tuber, a type of charger, can hold its charge longer than other types of chargers, giving the player more time to get into position before instantly firing their fully charged shot. The Dapple Dualies enable quicker dodge rolls.

These things look a bit dodgy…

After the new main weapons, new sub-weapons and specials were shown. The Autobomb sub-weapon is essentially like a walking version of Splatoon’s Seeker. The Toxic Mist sub-weapon seems similar to the Disruptor, temporarily creating a small area that debuffs enemies within. The Tenta Missiles, Ink Jet, Sting Ray, and Splashdown are all described in our Global Testfire article. Previously unseen, the Inkstorm causes ink to literally rain down within a wide area, covering turf and damaging enemies underneath. The Bomb Launcher is a carbon copy of the Bomb Rush from the original Splatoon. Ink Armor is a team defense buff, negating the first enemy attack of any kind within a limited time. And the Baller seals an Inkling inside a transparent ball that can move and even climb walls, then explodes on command; no word on whether this ball protects you from damage while active, like the Bubbler from the original Splatoon.

After this, Nintendo went into more detail on gear, especially new gear abilities. If you hit an enemy at least once, but they survive, Thermal Ink allows you to track their position. You can take down destructible non-player objects, like Splash Walls, with ease using the Object Shredder ability. Respawn Punisher is the inverse of the original Splatoon’s Quick Respawn, slowing down splatted enemies’ respawn times by about a second. The Drop Roller lets you perform a dodge roll upon landing from a Super Jump, no matter what type of weapon you’re carrying, which may help you avoid falling straight into an ambush. Further new abilities had their icons shown but were not named or described.

After this, a few new details on Salmon Run were unveiled. It appears that this mode is not open every day, but when it is available, it’s there for 24 hours. Some Salmonid bosses were described, starting with the Steel Eel, a long creature that floats slightly above the ground and lays ink below itself. Flyfish essentially have an unlimited version of the Ink Jet, flying and firing explosives. The Steel Head throws giant bombs that explode in a wide radius. Other boss Salmonids were hinted at but not described. It appears that the water level surrounding the Salmon Run arena will gradually rise, forcing players to seek higher ground. At night, players can face a wave of fast-moving Salmonids. Some gear can only be unlocked by playing Salmon Run.

Nintendo also promises to support the game with continual updates, as with the original Splatoon, for at least a year. Among the first updates will be the Splat Brella, a main weapon which can alternately serve as either a shooter or a shield, and the Bubble Blower, a special which generates explosive bubbles that float in the air until shot. New gear and stages will also be coming following the game’s release. The first Splatfest, coming up on July 15 (slightly before the full game’s release, accessible as a free demo), will be Team Cake vs. Team Ice Cream. Unlike in the original Splatoon, players can co-op with registered friends who selected the same team.

Good for when your enemies try to rain on your parade

The new Inkopolis News Anchors, replacing Callie and Marie, are called Pearl and Marina. Pearl seems similar to Callie, and Marina to Marie, though both have different appearances and speech patterns from their predecessors.

To learn more, view our article on returning features from the original Splatoon.