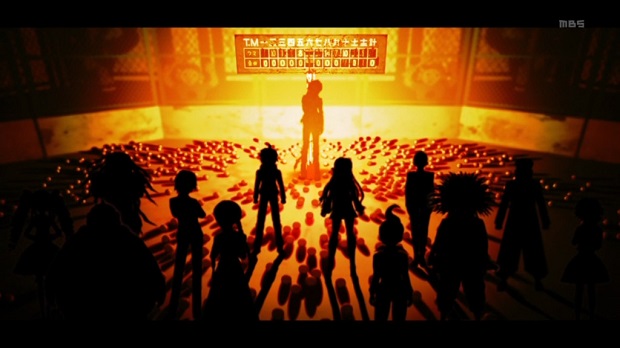 Before the Danganronpa series was more comedic and full of pink blood, Spike Chunsoft had initially envisioned a more “straight up gruesome horror” vibe for the game when it was known as Distrust early on in development. However, as production went on, the studio decided to tone down the game’s gruesome nature in favor of something that was more light-hearted.

Images of the game when it was called Distrust have surfaced, and are markedly darker in tone than the murder mystery visual novel that came to be.

Speaking with Polygon, series writer Kodaka Kazutaka explained how Distrust became the Danganronpa that was eventually released, citing a desire to expand the game’s potential audience for the game’s shift in tone.

“Distrust was the original image of the game obviously, and it was ‘psycho shock,'” Kazutaka said. “So essentially, for us, that would be something like just straight up gruesome horror. However, when we were thinking about whether or not to do it, we felt that the audience for that was really small. Even in a place like America, the audience would still be small but because the population’s bigger, it might sell more.

“But at the end of the day, things of that nature that are that gruesome and that dark, the audience was too small for us to really want to pursue that to its end.”

After it was decided to scale back some of the more horrific aspects of the game, Spike changed the game’s red blood to pink, as well as altered an entire murder that would’ve taken place in the game that had a character being cut to pieces in favor of one that left the victim whole.

“It’s like the character loses his essence by doing that,” Kazutaka said. “Even though a character might die during the events of the game, provided they remain whole, I feel that they’ll remain whole in the person’s memory, and that character will still be cute or memorable or liked by the player.

“But if I were to actually have them be dismembered, the character would lose that sense of [their essence] and the ability to remain within the player’s imagination and memory.”

Despite Spike Chunsoft’s conscious decision to make the game less dark, Danganronpa is no stranger to dark moments, with the game’s murder mystery and extended story both going into some pretty horrifying places. A third mainline game in the series is currently in the works, but is in the very early stages of production.

NIS America recently confirmed plans to localize the spin-off called Danganronpa: Another Episode, which we got some hands-on time with.

For more on Danganronpa, check out our spoilercast and interview with the series producer.