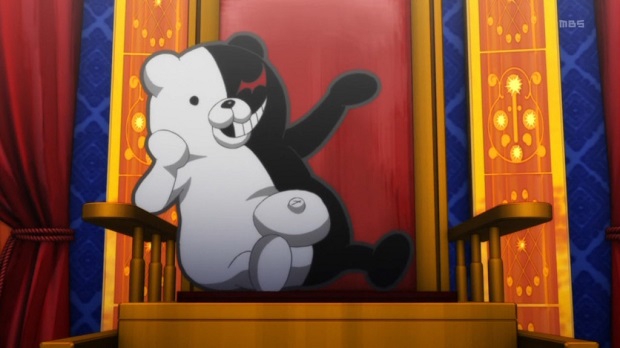 Because Danganronpa 3’s story hasn’t been written yet, details on what the third visual novel will entail are scarce. However, series writer Kodaka Kazutaka has been hinting at what the future holds for the series in recent interviews.

The most recent detail to come from these interviews is that the fate of series mascot Monokuma is not entirely certain for future games. Speaking with Game Informer, Kazutaka explained that while he does want to see the series’ black-and-white bear appear in Danganronpa 3, that might not be possible considering the circumstances of previous games.

When asked about even farther in the future, even surpassing this illusive third game, Kazutaka told Game Informer that he has no real interest in trying to make the Danganronpa story more appealing to a wider audience, as he believes that would be contradictory to the game he wants to make.

“One thing that won’t change is that idea of surprising players, keeping them really on their toes, and wondering what’s going to happen next. I’m also not really interested in growing the fanbase or making it more broadly appeal to people. I just want to make a cool game that I’m really proud of.”

Despite Danganronpa 3’s early development status, Kazutaka has compared his current idea for the game to Back to the Future. NIS America recently confirmed that the series’ shooter spin-off, Danganronpa: Another Episode, will be coming to North America later this year, and we here at Gaming Trend recently got some hands-on time with the shooter.

For more on Danganronpa, check out our spoilercast of the first two games and analysis of the main villain.