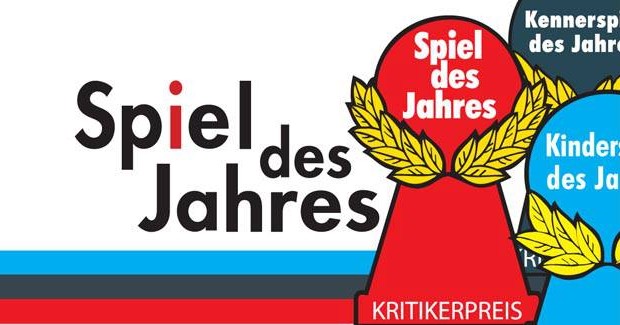 Considered the Oscar of the board game industry, the Spiel des Jahres is handed out yearly by a jury of experts in Germany. If Ticket to Ride, Dixit,  Carcassonne, 7 Wonders, or Dominion are game titles familiar to you, then you’ve heard of past winners of the award.

The SdJ was handed out in Germany July 8.  The award consists of three categories:

The Kinderspiel is geared toward young kids, with many of the titles strictly German releases that often fail to come to the U.S. The Spiel is considered an all-around best, though with an appeal that will cross most age groups and gaming skills. With a family with older children the target, the jury looks at Spiel winners as a game most people will grok easily. In recognition of the burgeoning board game market, the Kennerspiel was added in 2011. It rewards games that ratchet up the rules complexity a notch to appeal to experienced gamers.

Ever played cards with the faces turned away from you? Hanabi is a secret information cooperative game where up to five players attempt to stack five sets of five cards in numerical order by color/suit from 1 to 5. A player can offer clues about another player’s viewable cards based solely on color or numeral. Eight chits allow for a clue per chit, and whenever a card is discarded, a chit can be recovered for later use. Make a mistake and lightning strikes. Make three and the game ends. A perfect game is 25 points. The most recent version of the game adds a multicolored suit that can add a variety of playing conditions. Tense, dramatic, and with rules explainable in less than a minute, Hanabi is a fantastic group gaming experience and has a street price around $10.

If you are familiar with Magic: The Gathering or Dungeons & Dragons, you may have heard of the cooperative board games Castle Ravenloft, The Wrath of Ashardalon, or The Legend of Drizzt. Legends of Andor is a decidedly European take on these American miniatures-based adventure games. Blending fantasy quests with Eurogame elements, Legends of Andor offers two to four players a limitless “sandbox” for experiencing not only the game’s five included scenarios but also the ability to make their own. With expansions sure to follow, beautiful artwork, and a 75-minute game length, players get the best of a dungeon crawl but without the huge time commitment. Between printings at the moment, Legends of Andor has a street price around $42.

As for the Kinderspiel des Jahres, the winner was announced two weeks ago: Der verzauberte Turm. Despite being a clever blend of magnetic keys, princesses, and sorcerers, this game will likely suffer the fate of many Kinderspiel winners and remain nearly impossible to find in the U.S.

Great choices. Great games. If you’re looking to get into board games (and what talented, good-looking person isn’t?), picking a Spiel des Jahres winner is always a good place to start.