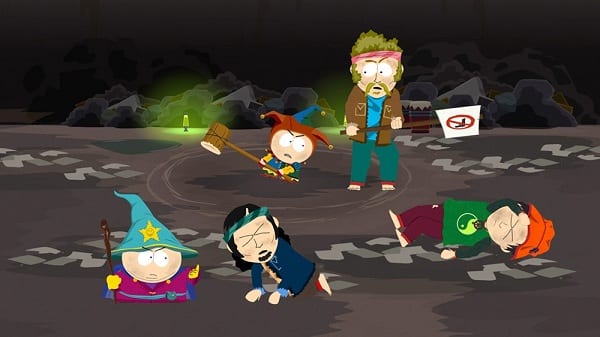 Oh dear. What started as a rather bleak outlook for THQ just got a little worse as the metaphorical knife in their gut continues to be turned. According to a report from Polygon, South Park Studios is kind of upset with the sale of their upcoming Obsidian developed RPG, South Park: The Stick of Truth, and has objected to its sale. They’re looking for recompense to the tune of $2.275 million and “adequate assurance of future performance;” meaning, they want to make sure the game isn’t just going to flop out of THQ like a dead fish. From the Polygon report:

South Park Digital Studios objects to the proposed sale, stating in the document that “applicable law excuses Licensor from accepting performance from or rendering performance to a party other than THQ.” Furthermore, even if the acquisition were possible, THQ has “not provided adequate assurance of future performance of the Deal Memo in the hands of a prospective purchaser.” The sale would require South Park Digital Studios’ consent because the elements being sold are owned and licensed by the studio.

According to the objection, the Deal Memo affords South Park Digital Studios “the option to acquire from THQ all elements of the South Park game and related products in the event of THQ’s breach, provided that Licensor pays to THQ the actual costs incurred and paid by THQ.”

And this occurs literally the day we posted our most anticipated games for 2013. Looks like South Park: The Stick of Truth will probably miss that March release date. When will THQ finally catch a break? We’ll report more as this story develops.