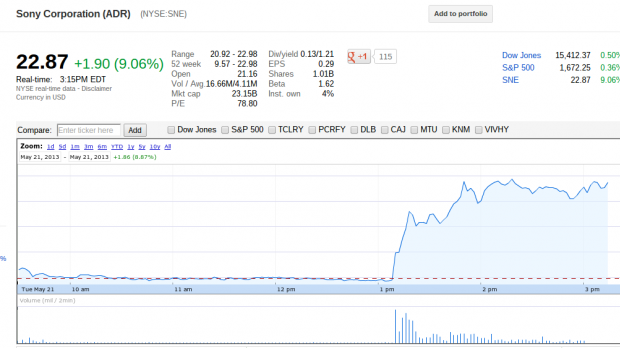 We here at Gaming Trend are a bit… skeptical about the Microsoft’s recently announced next-gen console, the Xbox One. The conference spent most of its time talking about features that have literally nothing to do with actual video gaming, and instead focused on Kinect and integration with cable television and sports broadcasts. What little time spent on video games was done so almost obliquely, with pre-rendered or live action trailers of safe announcements like Forza, with the only in-game footage shown being a brief snippet of Call of Duty: Ghosts at the very end of the conference.

Needless to say, the market has reacted.

While Microsoft (NASDAQ:MSFT) only saw a slight downturn in stock sales (-.22/-.67%, sitting at 34.84 as of this writing), Sony‘s stock (NYSE:SNE)  has soared to over 9% of its starting value since the beginning of the Xbox reveal. Sony opened the day at 21.16 per share, and is currently sitting at 22.87 per share, a mere hour after Microsoft’s conference.

What does this mean? Not too much for Microsoft. Their stock barely took a dent, meaning that while the buzz around the launch has been a resounding “meh,” it hasn’t been enough to really hurt them (though I’m sure they were hoping for rising stock, rather than falling). Sony, however, is riding this conference all the way to the bank. As people wondered if Sony showed their hand too early, this news comes as a breath of fresh air for the beleaguered company, especially after a year of studio closures and property sales.

It’s still too early to tell what the future holds for both of these systems, though with E3 right around the corner, we’ll likely find out a lot more information about the specifics of each system, as well as the exclusive games that will drive sales during the early adoption phase of the hardware.

Who knew people would want to see actual games at a system reveal?