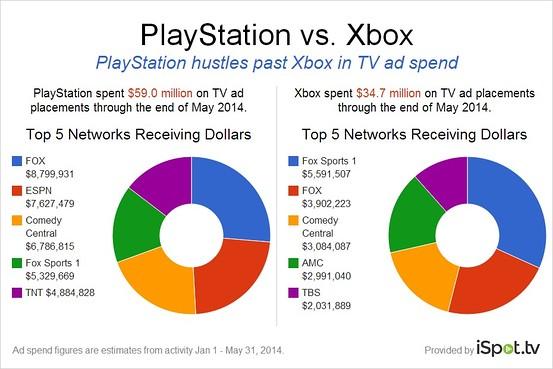 From the looks of it, Sony is spending significantly more money on television ads for PlayStation than Microsoft is for Xbox.

Research firm iSpot [via Wall Street Journal] Sony spent over $59 million on television ads marketing the PlayStation 4 between January and May 2014. Comparatively, Microsoft spent $34.7 million on Xbox One television ads in the same time frame.

Both company’s focused on similar channels, with FOX and Comedy Central both getting top spots in both PlayStation and Xbox advertising. Sony spent a lot of money on TNT advertising and Fox Sports 1, where Microsoft differentiated by advertising on AMC and TBS.

According to iSpot’s data, Sony’s “Greatness” ad and Microsoft’s “all-in-one” ad were both company’s most successful, generating the most social interactions (tweets, Facebook likes, etc.)

The last reported sales numbers for the PlayStation 4 had it having sold 7 million units, while the Xbox One had shipped 5 million units to retailers.