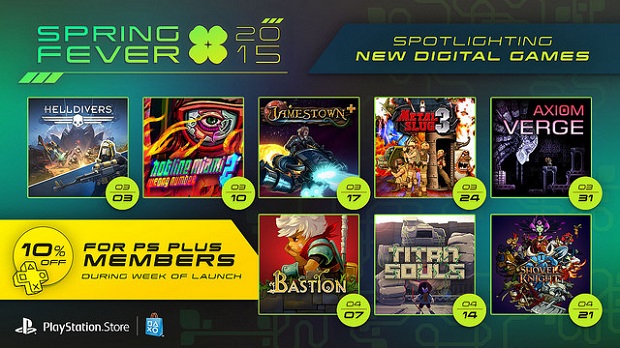 Sony has announced the deals it will be featuring in its “Spring Fever” sale starting next month.

Beginning on March 8th, PlayStation Plus subscribers will be getting a ten percent discount on brand new games, as well as access to sales for entire franchises over the course of an eight week period.

The following games will be launching over the course of the following eight weeks with a ten percent discount for Plus subscribers:

Helldivers, Hotline Miami 2, Metal Slug 3, Titan Souls, and Shovel Knight will all support cross-buy, while Bastion and Axiom Verge will do the same when they eventually launch on Vita.

The sales on game and movie franchises that will coincide with these discount read as follows: