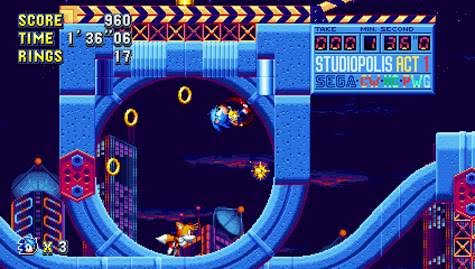 SEGA promised to take Sonic the Hedgehog back to his roots when it announced Sonic Mania during the series’ 25th anniversary party last July, and today, the company revealed the new entry will also launch on Nintendo Switch.

The announcement touts news of a limited Collector’s Edition of the game retailing at $69.99 that includes: Sonic Mania, a 12-inch statue with SEGA’s startup audio, a SEGA cartridge cast with a golden ring, a metallic collector’s card and a special box. The Collector’s Edition will only be available in North America, and pre-orders are available now.

Sonic Mania dashes back to the series’ side-scrolling days — but this time with 60 FPS gameplay. Players can assume the roles of Sonic, Tails or Knuckles to thwart the no-good-at-being-evil Dr. Eggman.

Players will have to use Tails’ flight, Knuckles’ climbing abilities and Sonic’s new Drop Dash ability to conquer their environments.

There’s no release date yet, but SEGA projects a Spring release on Switch, Xbox One, PS4 and PC.