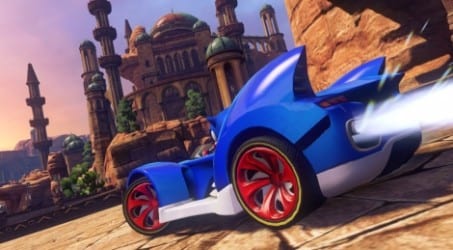 Sega has announced that Sonic & All-Stars Racing Transformed, a sequel to Sonic & Sega All-Stars Racing, will be released in late 2012 for Xbox 360, PS3, 3DS, Playstation Vita and PC digital download. The “Transformed” element of the title comes from a new aspect of gameplay: during races, there will be air, land and water portions of the track where the player’s vehicle will transform between car, boat and plane. David Corless, Global Sonic Brand Director, had this to say:

Given the fantastic feedback we received from critics and consumers alike for the first game we really wanted to push the boundaries on our follow up game, Sonic & All-Stars Racing Transformed. The transforming vehicles allow us to do this – as well as drifting your car around the corners of a track, you get to fly your plane and pilot your boat against others all within one race. Add to this a grid full of star characters, retro IP, fun, fast race modes and cool tracks and racing fans of all ages are sure to love this one!

Along with numerous characters from the Sonic series, the game also feauteres other Sega characters such as Beat from Jet Grind Radio, Gillius Thunderhead from the classic hack-and-slash Golden Axe and AiAi from Super Monkey Ball.