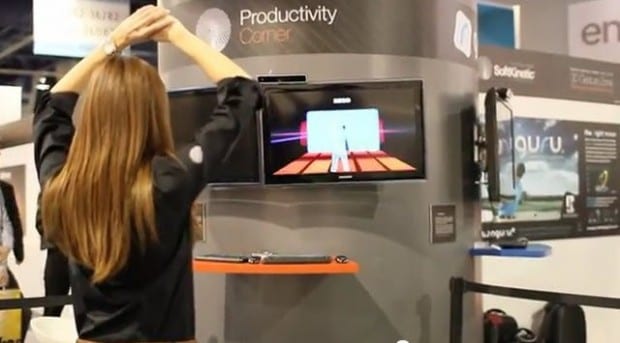 Today begins the Mobile World Congress 2013, and it would appear that there could be some new things in the works when it comes to the world of motion capturing and motion fueled gaming. In a press release today, SoftKinect has announced that they will be powering gesture control solutions for some of the leading technology leaders in Barcelona, Spain for the Mobile World Congress 2013. The event, lasting from February 25 to February 28, will have the company displaying its endeavors with names like Intel, Marvell, and YOUi labs in demonstrations ranging from full body movements in a living room, to simple finger tracking on both laptops and desktops.

Attendees will be able to test out these technologies at various booths during the exhibit. SoftKinect and partner YOUi Labs, will be demonstrating a smart TV interface using both their DepthSense® 311 camera and iisu® middleware that is capable of being controlled completely by gesture and is able to recognize biometric reading as well as scene analysis with a similar display being conducted with Marvell. Another booth will display their work with Intel and their Perceptual Computing laptop experience using Intel’s Creative Interactive Gesture camera (which is based off of SoftKinects DepthSense® camera) and the iisu middleware (also included in the Intel SDK) for use with hand and finger tracking at close range.

In a quote by Michael Tombroff, chief executive officer of SoftKinect, he states:

Gesture-based controls and recognition are quickly moving into many parts of our daily lives – from the living room to the office and beyond. As an established leader in this field we are working with a number of high profile companies to bring this technology to market. We are excited to help power both close interaction and long range experiences with such an esteemed group of partner companies at this year’s Mobile World Congress.

The possibilities that were unlocked when Microsoft released the Kinect are growing with each passing day. The work that SoftKinect is doing with this technology may allow everyone to use gesture controls for all platforms when it comes to gaming for various reasons. Advanced recognition of your surroundings may enable gamers to use tables or chairs as forms of cover in shooters. Likewise, a person playing real-time strategy may be able to voice command one thing to their units while simultaneously scrolling the map for new targets. Possibilities are becoming endless now with games, and in time we may even have a chance to create our own holodeck to truly immerse ourselves in the game.